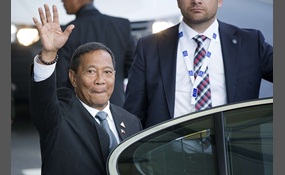 Edward Joseph "Ed" Snowden is an American computer professional who leaked classified information from the National Security Agency, starting in June 2013. A former system administrator for the Central Intelligence Agency and a counterintelligence t... rainer at the Defense Intelligence Agency, he later worked for the private intelligence contractor Dell inside an NSA outpost in Japan. In March 2013, he joined the consulting firm Booz Allen Hamilton inside the NSA center in Hawaii. In June 2013, he came to international attention after disclosing to several media outlets thousands of classified documents that he acquired while working as an NSA contractor for Dell and Booz Allen Hamilton. Snowden's leaked documents revealed numerous global surveillance programs, many of them run by the NSA and the Five Eyes with the cooperation of telecommunication companies and European governments. A subject of controversy, Snowden has been variously called a hero, a whistleblower, a dissident, a patriot, and a traitor. His disclosures have fueled debates over mass surveillance, government secrecy, and the balance between national security and information privacy   more
4 votes
0 comments
Edward Snowden - Voter Comments
No Comments
Vote & Comment
2

Sakura Haruno is a fictional character in the Naruto manga and anime series created by Masashi Kishimoto. In the anime and manga, Sakura is a kunoichi affiliated with the village of Konohagakure, and part of Team 7, which consists of herself, Naruto...  Uzumaki, Sasuke Uchiha, and their sensei, Kakashi Hatake. Sakura initially has an infatuation for Sasuke, praising him at every juncture, and heaping scorn upon the less skilled Naruto. Over the course of the series, she begins to shed this singularly driven persona, and grows more appreciative and accepting of Naruto. Sakura has appeared in several pieces of Naruto media, including the nine feature films in the series, all of the original video animations, and several video games. Sakura has become the series' female lead, although she was not immediately intended for the role. Kishimoto has had difficulty in drawing her, resulting in Kishimoto inadvertently emphasizing certain parts of her appearance, including her large forehead. Chie Nakamura voices the character in the animated adaptations of the series, while Kate Higgins plays her in the English dub   more
1 vote
1 comment
Sakura Haruno - Voter Comments

Alfred Josef Ferdinand Jodl was a German military commander, attaining the position of Chief of the Operations Staff of the Armed Forces High Command during World War II, acting as deputy to Wilhelm Keitel, and signed the unconditional surrender of ... Germany as a representative for German president Karl Dönitz. At Nuremberg he was tried, sentenced to death and hanged as a war criminal   more
1 vote
0 comments
Alfred Jodl - Voter Comments
No Comments
Vote & Comment
5

Tardar Sauce, better known by her Internet moniker "Grumpy Cat", is a cat and Internet celebrity known for her grumpy facial expression.Her owner, Tabatha Bundesen, says that her permanently grumpy-looking face is due to an underbite and feline dwar... fism. Grumpy Cat's popularity originated from a picture posted to the social news website Reddit by Bundesen's brother Bryan on September 22, 2012. It was made into an image macro with grumpy captions. As of December 10, 2014, "The Official Grumpy Cat" on Facebook has over 7 million "likes". Grumpy Cat was featured on the front page of The Wall Street Journal on May 30, 2013 and on the cover of New York magazine on October 7, 2013   more
1 vote
1 comment
Tardar Sauce - Voter Comments

Mr. Bean is a British television programme series of fourteen 25-minute episodes written by and starring Rowan Atkinson as the title character. Different episodes were also written by Robin Driscoll, Richard Curtis and one by Ben Elton. Thirteen of ... the episodes were broadcast on ITV, from the pilot on 1 January 1990, until "Goodnight Mr. Bean" on 31 October 1995. A clip show, "The Best Bits of Mr. Bean", was broadcast on 15 December 1995, and one episode, "Hair by Mr. Bean of London" was not broadcast until 2006 on Nickelodeon.Based on a character originally developed by Atkinson while he was studying for his master's degree at Oxford University, the series follows the exploits of Mr. Bean, described by Atkinson as "a child in a grown man's body", in solving various problems presented by everyday tasks and often causing disruption in the process. Bean rarely speaks, and the largely physical humour of the series is derived from his interactions with other people and his unusual solutions to situations. The series was influenced by physical performers such as Jacques Tati and comic actors from silent films   more
0 votes
0 comments
Mr. Bean - Voter Comments
No Comments
Vote & Comment
7

Tony the Tiger is the advertising cartoon mascot for Kellogg's Frosted Flakes breakfast cereal, appearing on its packaging and advertising. More recently, Tony has also become the mascot for Tony's Cinnamon Krunchers and Tiger Power. Since his debut...  in 1951, the character has spanned several generations and become a breakfast cereal icon   more
0 votes
0 comments
Tony the Tiger - Voter Comments
No Comments
Vote & Comment
9

Mario is a fictional character in the Mario video game franchise, created by Nintendo's Japanese video game designer, Shigeru Miyamoto. Serving as the company's mascot and the eponymous protagonist of the series, Mario has appeared in over 200 video...  games since his creation. Depicted as a short, pudgy, Italian plumber who resides in the Mushroom Kingdom, his adventures generally center upon rescuing Princess Peach from the Koopa villain Bowser. His younger brother is Luigi. The Mario franchise is the best-selling video game franchise of all time. Over 210 million units of the overall Mario series of games have been sold. Outside of the Super Mario platform series, other Mario genres include the Mario Kart racing series, sports games such as the Mario Tennis and Mario Golf series, role-playing games such as Super Mario RPG and Paper Mario, and educational games such as Mario Is Missing! And Mario's Time Machine. The franchise has branched into several mediums, including television shows, film, comics and a line of licensed merchandise. Since 1995, Mario has been voiced by Charles Martinet   more
0 votes
0 comments
Mario - Voter Comments
No Comments
Vote & Comment
10

Julian Paul Assange is an Australian publisher and journalist. He is known as the editor-in-chief of the website WikiLeaks, which he co-founded in 2006 after an earlier career in hacking and programming. WikiLeaks achieved particular prominence in 2... 010 when it published U.S. military and diplomatic documents leaked by Chelsea Manning. Assange has been under investigation in the United States since that time. In the same year, the Swedish Director of Public Prosecution opened an investigation into sexual offences that Assange is alleged to have committed. In 2012, facing extradition to Sweden, he was granted political asylum by Ecuador and took refuge at the Embassy of Ecuador in London   more
0 votes
0 comments
Julian Assange - Voter Comments
No Comments
Vote & Comment
14

Timothy Franz Geithner is an American economic policy maker and central banker who served as the 75th United States Secretary of the Treasury, under President Barack Obama, from 2009 to 2013. He was previously the president of the Federal Reserve Ba... nk of New York from 2003 to 2009. He now serves as president of Warburg Pincus, a Wall Street private equity firm. Geithner's position included a large role in directing the Federal Government's spending on the crisis, including allocation of $350 billion of funds from the Troubled Asset Relief Program enacted during the previous administration. At the end of his first year in office, he continued to deal with multiple high visibility issues, including administration efforts to restructure the regulation of the nation's financial system, attempts to spur recovery of both the mortgage market and the automobile industry, demands for protectionism, President Obama's tax changes, and negotiations with foreign governments on approaches to worldwide financial issues   more
0 votes
0 comments
Timothy Geithner - Voter Comments
No Comments
Vote & Comment
16

Sasuke Uchiha is a fictional character from the Naruto manga and anime series created by Masashi Kishimoto. In the story, Sasuke is a member of the Uchiha clan, a highly skilled clan of ninjas allied to the village of Konohagakure. His primary motiv... ation throughout the series is to avenge the destruction of his entire clan by killing his brother, Itachi Uchiha, a task he pursues at all costs. While he was initially cold and singularly driven by his revenge, he becomes more empathetic through his relationships with other characters, notably Naruto Uzumaki, whom he comes to consider as a rival. Sasuke has additionally appeared in several of the featured movies in the series, as well as several other media relating to the series, including several video games and OVAs. He was created as a rival and foil to the series' titular character, Naruto Uzumaki. Sasuke's design caused difficulties for Kishimoto as he drew the manga scenes, but he has grown to enjoy drawing him. In the animated adaptations from the manga Sasuke has been voiced by Noriaki Sugiyama in Japanese and Yuri Lowenthal in the English dub   more
0 votes
0 comments
Sasuke Uchiha - Voter Comments
No Comments
Vote & Comment
17