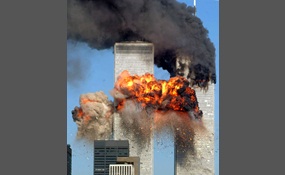 9/11 Terrorist Passport - does anyone actually believe the nonsense?

No, the whole story is ludicrous.

Yes, I believe this nonsense.

1814Username says2014-07-02T18:29:00.1696160-05:00
Report Post
To Preston who commented above -- so a passport flies out of a pocket, out of a plane, survives a fireball hot enough to melt steel, and then survives the crash. That is one tough passport!! Titanium engines on the plane were destroyed, but that paper passport sure is tough. Then there is the fact that not one ID from any of the passengers were found. Only the passport from the terrorists. But I will give you this, at the crash site, you literally can go see thousands of cars that were burnt but within those cars paper was found intact. That doesn't make sense either. Something more happened at the Pentagon that no one talks about. Go look at the photos yourself. Look up a presentation by Dr. Judy Wood. You will see the cars and the paper.