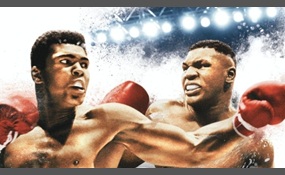 Muhammad Ali is an American former professional boxer, generally considered among the greatest heavyweights in the sport's history. A controversial and polarizing figure during his early career, Ali is today widely regarded for the skills he display... ed in the ring plus the values he exemplified outside of it: religious freedom, racial justice and the triumph of principle over expedience. He is one of the most recognized sports figures of the past 100 years, crowned "Sportsman of the Century" by Sports Illustrated and "Sports Personality of the Century" by the BBC.Born Cassius Clay, at the age of 22 he won the world heavyweight championship in 1964 from Sonny Liston in a stunning upset. Shortly after that bout, Ali joined the Nation of Islam and changed his name. He converted to Sunni Islam in 1975.In 1967, three years after winning the heavyweight title, Ali refused to be conscripted into the U.S. military, citing his religious beliefs and opposition to American involvement in the Vietnam War. The U.S. government declined to recognize him as a conscientious objector, however, because Ali declared that he would fight in a war if directed to do so by Allah or his messenger   more
5 votes
1 comment
Muhammad Ali - Voter Comments

Michael Gerard "Mike" Tyson is an American retired professional boxer. Tyson is a former undisputed heavyweight champion of the world and holds the record as the youngest boxer to win the WBC, WBA and IBF heavyweight titles at 20 years, 4 months, an... d 22 days old. Tyson won his first 19 professional bouts by knockout, 12 of them in the first round. He won the WBC title in 1986 after defeating Trevor Berbick by a TKO in the second round. In 1987, Tyson added the WBA and IBF titles after defeating James Smith and Tony Tucker. He was the first heavyweight boxer to simultaneously hold the WBA, WBC and IBF titles, and the only heavyweight to successively unify them.In 1988, Tyson became the lineal champion when he knocked out Michael Spinks after 91 seconds. Tyson successfully defended the world heavyweight championship nine times, including victories over Larry Holmes and Frank Bruno. In 1990, he lost his titles to underdog James "Buster" Douglas, by a knockout in round 10. Attempting to regain the titles, he defeated Donovan Ruddock twice in 1991, but he pulled out of a fight with undisputed heavyweight champion Evander Holyfield due to injury   more
1 vote
0 comments
Mike Tyson - Voter Comments
No Comments
Vote & Comment
No comments yet.
Leave a comment...
(Maximum 900 words)
Privacy Policy | Terms of Use
Sitemap | View Desktop Version
©2021 Debate.org. All rights reserved.