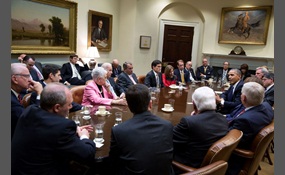 It is good to be somewhat involved in the affairs of other countries, but the war on terror has gone too far. Continue a presence in the UN and be involved somewhat in other countries.
12 votes
6 comments
In-between - Voter Comments

donald.keller says2014-08-07T17:40:59.7712199-05:00
Report Post
You can't abandon the world to it's own issues... We are too invested in a global economy to stop playing a role on the global stage. WWII taught us that, and it's only ever more truer as the days go by. We are a global nation with global interests and a major role to play, and leaving it all behind would only do us and the world harm.

dmussi12 says2014-08-07T17:48:09.4085274-05:00
Report Post
The only places we should get out of are peaceful allies like Germany and the UK. Plus we should reduce forces in peaceful countries with nearby 'hot zones' like Okinawa. Everything else is fine, although a minor across-the-board military reduction would be nice.

Non-interventionist, it's high time we get out of the affairs of other country

Get out of the UN, repeal NAFTA and other "free trade agreements" that threatens our national sovereignty. End the war on terror and worry about our own borders.
6 votes
0 comments
Non-interventionist, it's high time we get out of the affairs of other country - Voter Comments
No Comments
Vote & Comment
3

Stay in the UN, continue American presence throughout the world. The war on terror must go on and we need to merge into a new world order. It is high time we end all forms of isolationism and merge as a one world.
2 votes
1 comment
Interventionist - Voter Comments

PetersSmith says2014-08-07T17:39:10.3344822-05:00
Report Post
Volcanoes13: Everything you do here is permanent and a stain on your well being. We will hold you accountable for your grammar mistakes until the day you're rotting in your grave.