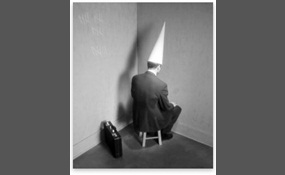 Are humans becoming smarter or stupider over time?

Yes, because stupid people are having the most children

Yes, because technology is making us lazy

Technology has reduced the amount we have to think for ourselves, thus causing our brains to slowly petrify.
4 votes
1 comment
Yes, because technology is making us lazy - Voter Comments

No, humans are slowly becoming smarter

Humans are no smarter now than a thousand years ago

Human evolution is a slow process. The process of evolving greater intellectual capacity takes thousands of years.
3 votes
0 comments
Humans are no smarter now than a thousand years ago - Voter Comments
No Comments
Vote & Comment
5

No, humans are rapidly becoming smarter

Yes, because of toxins and pollution in the environment

Pollution and toxins are slowly contaminating us as a species and such, we are slowly rotting from the inside out.
1 vote
0 comments
Yes, because of toxins and pollution in the environment - Voter Comments
No Comments
Vote & Comment
7

No, because humans can't get any stupider

It would be difficult for humans to become any more stupid than they already are
0 votes
0 comments
No, because humans can't get any stupider - Voter Comments
No Comments
Vote & Comment
Leave a comment...
(Maximum 900 words)

TBR says2015-04-08T10:31:54.6700522-05:00
Report Post
"Smarter" is difficult to parse this way. We stand on the shoulders of giants, each subsequent generation benefiting from the store of knowledge of our ancestors. We are "smarter". Biologically we progress (evolve) into our environment. That can go either way for "smart".

cludwig says2015-04-08T10:36:11.6502432-05:00
Report Post
I agree that we stand on the shoulders of giants TBR. In a way, the work of the great thinkers before us has the potential to enable future generations to become lazy and unable to think for themselves - they don't have to when the hard work has been done for them. There seems to be the potential for humans to become more stupid over time if we no longer have to think for ourselves.

TBR says2015-04-08T12:31:50.2428431-05:00
Report Post
"There seems to be the potential for humans to become more stupid over time" - Yes. Due to the forces of evolution, given proper conditions, we could become "less smart". If additional "smart" is unnecessary for our survival, there is no reason for that to not be true.

TBR says2015-04-08T13:50:51.5109707-05:00
Report Post
It is very easy to see Idiocracy (one of my favorite movies) as a documentary. It might take a little more time then that, but concept is sound. Yes, as a stereotype that works, more "intelligent" people are having less children later in life. This leads to generational compression multiplying the issue (if there is one).