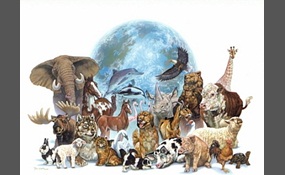 Are humans the most valuable species?

We are one of the most intelligent species and are the reason why a variety of species aren't extinct. The world wouldn't be able to thrive without humans. Although, humans may be a destructive species as a collective, we have benefited ourselves an... d other species more than any other   more
10 votes
1 comment
Yes, we're dominant - Voter Comments

All species are equal in value, and you cannot measure value off of something quite foreign. In the Early 1900's, Americans & Europeans called those who killed foreigners in China "boxers" because they were ignorant to Chinese culture altogether, it...  is the same with humans and other animals. We have no true grasp or understanding of other species because we are still developing understanding of ourselves. There is no 'most valuable' species, nor are we dominant   more
5 votes
1 comment
No, we're delusional - Voter Comments

Rust_Cohle says2015-07-18T02:31:59.9987905-05:00
Report Post
I think human consciousness is a tragic misstep in evolution. We became too self-aware. Nature created an aspect of nature separate from itself. We are creatures that should not exist by natural law. We are things that labor under the illusion of having a self, this accretion of sensory experience and feelings, programmed with total assurance that we are each somebody, when in fact everybody's nobody.
Vote & Comment
3

No, because capability has nothing to do with value

Humans have the most impact (positively and negatively) on this earth, but that does not make them greater. That is the same as saying 3 year old children are less valuable than adults because they are less intelligent and developed. We are respon... sible for shaping other species growth   more
2 votes
1 comment
No, because capability has nothing to do with value - Voter Comments

Donderpants says2015-07-18T04:56:20.6542496-05:00
Report Post
We aren't so special. We cause proportionally the least joy to the rest of the world. Earth would be a better place without us. We aren't even the smartest- we just use our very biased opinion to name a very specific type of intelligence the best. Elephants are almost as good at us in practically every measure mentally, and absolutely every measure physically. In memory they destroy us. If we took an IQ test not biased by our opinion of what counts as smart, we'd lose for sure. We weren't even individually the smartest humans- Neanderthals actually outperformed us in every way. The only reason we rule the modern world is because we randomly made up a ludicrously detailed language around 70,000 years ago and with this incredibly detailed language, we made up religions to unify thousands of us. Homo sapiens are average to poor at every other thing in existence. This is symbolized by how until then, we were solidly in the middle of the food chain, and after that we leaped to the top of it at breakneck speeds. Aside from our language, we aren't an impressive species.
Vote & Comment
No comments yet.
Leave a comment...
(Maximum 900 words)
Privacy Policy | Terms of Use
Sitemap | View Desktop Version
©2020 Debate.org. All rights reserved.