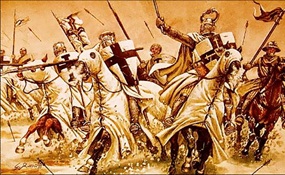 Are ISIS and the Inquisition alike?

The Inquisition was a period in the 12th and 13th centuries that involved the Church and the Crusades. The Church would try people who had conflicting thoughts other than Christianity, and would torture them until they admitted to it. They would then force them to pray and ask for forgiveness. The Crusades were Christian warriors who swept through the Middle East, killing almost all Jews and Muslims alike, while capturing all the cities in the area on their way. The purpose was to protect the land where "Je

Varrack says2015-05-20T20:57:35.6678562-05:00
Report Post
The Inquisition didn't do anything to the natives that the natives weren't doing to themselves (enslaving each other, sacrificing each other, etc.). ISIS, on the other hand, beheads people just because they can. They are unquestionably more radical and inhumane.

58539672 says2015-05-20T22:51:48.3212540-05:00
Report Post
Actually, historians have recently found that the Inquisition wasn't as bad as we had previously thought. Many of the stories about the Inquisition were actually written years after it ended. For instance, a few years ago many historians estimated the number of people killed in the Spanish Inquisition to be in the millions, but now has been narrowed down to 30,000-300,000. And of the 125,000 church tribunals, only about 1% actually got executed. In fact more were killed from non-church tribunals than church ones.