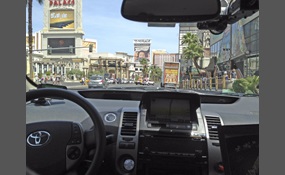 While creators for such a vehicle certainly have tough decisions to make, a self-automated vehicle would improve the quality of life for humanity. Such a vehicle would provide extra time to those using them, as it would make more efficient decisions...  and would provide faster routes then opposed to a human's conduction. This veritable fact is accompanied with the truism that such a vehicle would make level-headed decisions as compared to humans. Unlike humans, such a vehicle would not get drunk, distracted or experience a panic attack, and would always hold the composure of a phlegmatic and responsible driver. They would have greater focus than humans and this would lead to a major decrease in accidents caused by reasons such as:DUI, loud family-quarrels, texting while driving, etc. Once the obstacles and problems are worked out, self-driving cars would prove to be effective instruments, quintessential of modern intellect and improvement, whilst saving irrevocable lives and time   more
19 votes
3 comments
No - Voter Comments

Arganger says2017-07-05T18:13:31.0925957Z
Report Post
Look, I just know that people who cannot drive- The blind, or epileptic for instance- have been looking forward to self driving cars for years so they don't have to really on things like uber.

Daikokuya says2017-09-01T01:06:34.7061875Z
Report Post
The typical driver isn't a professional driver, let alone knows too much about a basic car. Maneuvers and such couldn't be pulled off with a average commuter, a preset-coded instructions to do so in the called situation could prevent "moral decisions". Even so if an accident occurred, no car or any vehicle will be 100% safe.

rav2798 says2017-10-09T19:48:19.3359528Z
Report Post
I don't think it would be unethical however to completely end the production of cars like we have today would be a terrible mistake. Several people like to drive (like myself) however it would be nice having a fully autonomous vehicle for longer travel. I personally would like a fully autonomous vehicle to ride to college in the mornings so I could work on my engineering homework on my 48 minute commute from my house to school. However like I said at the beginning I would still like to have a car that I can actually drive on occasion as driving calms me on a bad day.
Vote & Comment
2

Self-Driving cars if created would produce a unequivocal scourge on society. While they are ballyhooed by car companies as a form of technological advancement and social improvement, such a creation would prove far more deleterious to society than b... eneficial. The premise of a car having a coded system that would be formed to tackle situations is disturbing, as they would be programmed to tackle difficult situations certain ways. Decisions such as whether such a car would prefer to hit a larger vehicle in a case of emergency, as opposed to a smaller one, or whether such a car would hit a motorcyclist with more protection(i.E. Having a helmet) as opposed to one with less safeness. These decisions are made on a day to day basis by numerous people, and yet they are justified in their actions, since they are forced to determine a choice in a split-second. However, if given forewarning of such a decision, any decent citizen would be faced with a tough moral problem, the same one that is being debated over by the creators of a self-automated car. While they would likely be more efficient and superior in their decision-making as juxtaposed to a persons' driving, self-automated vehicles are unethical and should not undergo production   more
12 votes
2 comments
Yes - Voter Comments

jbpohl says2017-10-14T10:58:46.1586046Z
Report Post
Autonomous cars operating with traditional manually operated vehicles will never achieve the intended benefits they claim to provide - which is a safer and more efficient means of transportation. I am against any action intended or unintentional consequence of this technology if it results in the prohibition of my right to operation my own vehicle. Yes, I know the law says that a drivers license is a privilege. I say baloney. I have the right to life, liberty and the pursuit of happiness. For me, I am happy when I can operate my own vehicle and enjoy the pleasure of driving. So STOP THIS LUNACY NOW and put all that energy into making cars that are energy efficient and do not pollute. That would be time better spent.