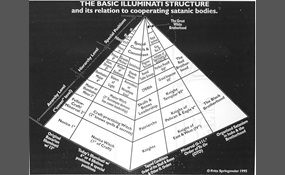 Are we being controlled as a society?

Berend says2015-10-13T02:10:07.4195629Z
Report Post
If you look at the site directions on the top left, where it says "Home > Polls" etc, you will see there are symbols like this ">". Draw a line from the top to the bottom to connect them and you have triangles. Notice how many buildings have cross beams? If you draw a line, the invisible one, from end to end, you get four triangles. That means they're everywhere. See? Their controlling you with subliminal messages because they are the Satanic Illuminati.
Vote & Comment
2

We are not being controlled.
3 votes
2 comments
No - Voter Comments

Yes. Emotional blackmail through societal norms and the media.

Society tells us what is good or bad, right or wrong, acceptable and not acceptable. Misbehave and you are ostracized by society. The media plays on our emotions, invoking anger, sorrow, fear, etc to gain viewers. They do this for financial gain but...  in the process they invoke actions due to the emotions they stir up. I try to tell myself that this is not a deliberate attempt at controlling society, but if that were not so, what is the point of political rallies? Or any rally for that matter? Why try to distract us with reality shows   more
3 votes
0 comments
Yes. Emotional blackmail through societal norms and the media. - Voter Comments
No Comments
Vote & Comment
4

Yes, the end result of Capitalism is always a Plutocracy

The wealth distribution and eventual aggregation of wealth at the top tiers of society in a capitalism demands that generation transition of wealth eventually supersedes entrepreneurial endeavor as the means by which individuals reach top tiers of s... ociety. This leads to the formation of small group of individuals who by familial inheritance more than anything have disproportionately more wealth and power than the majority public, and who are unlikely to rescind such wealth voluntarily as they are generally in control of the economic power structures which govern their own wealth acquisition   more
2 votes
0 comments
Yes, the end result of Capitalism is always a Plutocracy - Voter Comments
No Comments
Vote & Comment
5

Social democracy is a political ideology that officially has as its goal the establishment of democratic socialism through reformist and gradualist methods. Alternatively, social democracy is defined as a policy regime involving a universal welfare ... state and collective bargaining schemes within the framework of a capitalist economy. It is often used in this manner to refer to the social models and economic policies prominent in Western and Northern Europe during the later half of the 20th century.Following the split between reformists and revolutionary socialists in the Second International, social democrats have advocated for a peaceful and evolutionary transition of the economy to socialism through progressive social reform of capitalism. Social democracy asserts that the only acceptable constitutional form of government is representative democracy under the rule of law. It promotes extending democratic decision-making beyond political democracy to include economic democracy to guarantee employees and other economic stakeholders sufficient rights of co-determination   more
1 vote
0 comments
Social democracy - Voter Comments
No Comments
Vote & Comment
6

Yes, by John Cena and Kim Jong Un specifically, the leaders of the iLO0mYnaughty

Anti-capitalism comprises a wide variety of movements, ideas and attitudes that oppose capitalism, including anarchism. Anti-capitalists, in the strict sense of the word, are those who wish to replace capitalism with another type of economic system.
0 votes
0 comments
Anti-capitalism - Voter Comments
No Comments
Vote & Comment
Leave a comment...
(Maximum 900 words)

Forthelulz says2015-10-14T06:41:40.7870775Z
Report Post
@Cinnadeadmeat How considerate of them to type that out for you. Still not as hilarious as the Candlejack meme, which, as you know
Privacy Policy | Terms of Use
Sitemap | View Desktop Version
©2021 Debate.org. All rights reserved.