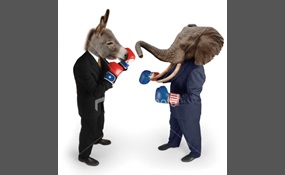 Are you a Republican or a Democrat?

The Republican Party, commonly referred to as the GOP, is one of the two major contemporary political parties in the United States, the other being its historic rival the Democratic Party. Founded by anti-slavery activists in 1854, the GOP dominated...  politics nationally and in most of the North for most of the period from 1860 to 1932. There have been 18 Republican presidents, the first being Abraham Lincoln, who served from 1861 until his assassination in 1865, and the most recent being George W. Bush, who served two full four-year terms 2001 to 2009. The most recent Republican presidential nominee was former Massachusetts governor Mitt Romney who lost in 2012.The party's platform is generally based upon American conservatism, in contrast to the contemporary American liberalism of the rival Democratic Party. The Republican Party's conservatism involves supporting free market capitalism, opposing regulation and labor unions, and supporting socially conservative policies. The party is generally split on the issue of how to deal with illegal immigration   more
8 votes
0 comments
Republican - Voter Comments
No Comments
Vote & Comment
3

The Democratic Party is one of the two major contemporary political parties in the United States, along with the younger Republican Party. Tracing its origins back to the Democratic-Republican Party, the modern Democratic Party was founded around 18... 28. There have been 15 Democratic presidents, the first being Andrew Jackson, who served from 1829 to 1837; the most recent is the current president, Barack Obama, who has served since 2009.Since the 1930s, the party has promoted a social-liberal platform, supporting a mixed economy and social justice. The party's philosophy of contemporary American liberalism advocates civil and political rights and liberties along with social justice. It pursues a mixed economy by providing government intervention and regulation in the economy. These interventions, such as universal health care, labor protection, social programs, equal opportunity, consumer protection, and environmental protection, form the party's economic policy basis. Until the late 20th century the party had a powerful conservative and populist wing based in the rural South, which over time has greatly diminished   more
4 votes
0 comments
Democrat - Voter Comments
No Comments
Vote & Comment
Leave a comment...
(Maximum 900 words)

NewLifeChristian says2015-08-23T12:57:34.8958204Z
Report Post
The Tea Party would be my second choice; however, I don't think the 'Tea Party' is even an actual party. I think they are technically a 'political movement'