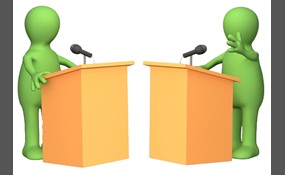 Are you part of a debate league?

Do you do debate outside of DDO? If you do please vote. If you don't…… then still vote! Thanks everyone!!!

The National Christian Forensics and Communications Association is a speech and debate league for Christian homeschooled students in the United States. The NCFCA was established in 2001 after outgrowing its parent organization, the Home School Legal...  Defense Association, which had been running the league since it was originally established in 1995. NCFCA is now organized under its own board of directors with regional and state leadership coordinating various tournaments throughout the season   more
2 votes
1 comment
National Christian Forensics and Communications Association (NCFCA) - Voter Comments

The National Forensic League is a non-partisan, non-profit educational honor society established to encourage and motivate American high school students to participate in and become proficient in public speaking. The League is the America's oldest a... nd largest high school speech and debate honor society. Since 1925, the League has enrolled over 1.4 million students in fulfillment of its vision of empowering every child in the United States "to become an effective communicator, ethical individual, critical thinker, and leader in a democratic society."The organization is the central agent for coordination and facilitation of heightened public awareness of the value of speech communication skills, development of educational initiatives for student and teacher training, excellence in interscholastic competition, and the promotion of honor society ideals.The National Forensic League is one of three major national organizations which direct high school competitive speech and debate events in the United States. The other two are the National Catholic Forensic League or NCFL, and the National Christian Forensics and Communications Association or NCFCA   more
2 votes
0 comments
National Forensic League (NFL) - Voter Comments
No Comments
Vote & Comment
4
VOTING CLOSED