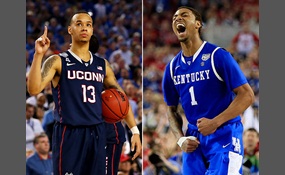 Are you sad that UK lost to uconn?

Happy Feet is a 2006 Australian-American computer-animated musical family film, directed, produced and co-written by George Miller. It was produced at Sydney-based visual effects and animation studio Animal Logic for Warner Bros., Village Roadshow P... ictures and Kingdom Feature Productions and was released in North American theaters on November 17, 2006. It is the first animated film produced by Kennedy Miller in association with visual effects/design company Animal Logic.Though primarily an animated film, Happy Feet does incorporate motion capture of live action humans in certain scenes. The film was simultaneously released in both conventional theatres and in IMAX 2D format. The studio had hinted that a future IMAX 3D release was a possibility. However, Warner Bros., the film’s production company, was on too tight a budget to release Happy Feet in IMAX digital 3D.Happy Feet won the Academy Award for Best Animated Feature and the BAFTA Award for Best Animated Film, and was nominated for the Annie Award for Best Animated Feature and the Saturn Award for Best Animated Film.The film was dedicated in memory of Nick Enright, Michael Jonson, Robby McNeilly Green, and Steve Irwin.A sequel, Happy Feet Two, was released into theatres November 18, 2011 and received mixed reviews   more
2 votes
0 comments
Yes, im sad... - Voter Comments
No Comments
Vote & Comment
2