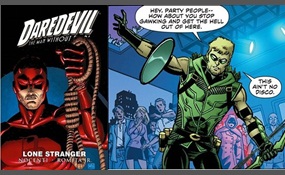 Which is the better tv series.

Fuzzed says2015-04-25T14:51:21.5166691-05:00
Report Post
Daredevil feels like what Arrow shouldve been. It turned from something dark to kiddie play hour with antiquated hero rules and teenager level love triangles and relationship melodrama. Daredevil is more down to earth, dirtier, at home on the streets, its hero suffering for his decisions and mistakes. Add to the fact that the action is far 'far' better and violence isnt edged around with kiddie gloves..
Vote & Comment
2

After a violent shipwreck, billionaire playboy Oliver Queen was missing and presumed dead for five years before being discovered alive on a remote island in the Pacific. When he returns home to Starling City Oliver has been changed by his ordeal on ... the island. While he hides the truth about the man he's become, he desperately wants to make amends for the actions he took as the boy he was. Most particularly, he seeks reconciliation with his former girlfriend, Laurel Lance. As Oliver reconnects with those closest to him, he secretly creates the persona of Arrow - a vigilante – to right the wrongs of his family, fight the ills of society, and restore Starling City to its former glory   more
4 votes
1 comment
Arrow - Voter Comments

Fuzzed says2015-04-26T07:02:26.6318864-05:00
Report Post
Ill tell you what, the biggest issue I have with virtually all hero shows, and the thing I like most about todays big teleivision hits, is that their losing the old school formula. You know the one, where the first two or three episodes of a second have something to do withe the central story arc and may mention the main villians, and may have any real character development, and then theyll sprinkle that around in 21 episodes, with only the 2-3 final ones going back to dealing with the main story arch. Theyre all guilty of it. Arrow, Flash, Gotham, SHIELD, Agent Carter, Louis and Clark, Smallville, etc etc etc.. It all feels like empty filler created so they can string the show along to make more epsidoes for purely financial reasons.. And it also feels like lazy writing. Daredevil ended that. It all directly connects to the main story arch, there are no filler episodes, and signficant characters will die without it having to be a 'special' episode. No more fluffer.. It feels like the Sopranos, Breaking Bad, and GoT finally rubbed off on a superhero show.
Privacy Policy | Terms of Use
Sitemap | View Desktop Version
©2020 Debate.org. All rights reserved.