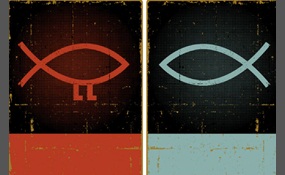 What is your take on religion

Atheism is, in a broad sense, the rejection of belief in the existence of deities. In a narrower sense, atheism is specifically the position that there are no deities. Most inclusively, atheism is the absence of belief that any deities exist. Atheis... m is contrasted with theism, which, in its most general form, is the belief that at least one deity exists.The term "atheism" originated from the Greek ἄθεος, meaning "without god", used as a pejorative term applied to those thought to reject the gods worshiped by the larger society. With the spread of freethought, skeptical inquiry, and subsequent increase in criticism of religion, application of the term narrowed in scope. The first individuals to identify themselves using the word "atheist" lived in the 18th century. Some ancient and modern religions are referred to as atheistic, as they either have no concepts of deities or deny a creator deity, yet still revere other god-like entities.Arguments for atheism range from the philosophical to social and historical approaches   more
18 votes
2 comments
Atheism - Voter Comments

Donderpants says2015-07-11T17:21:48.0434793-05:00
Report Post
I'm Christian myself, but I have to admit- atheists generally speaking work with logic and science more, and get less tunnel vision from religious beliefs, which I think makes them superior. I follow Christianity purely for the moral beliefs, I look at the bible from a logical and scientific view and recognize large chunks of it as metaphorical. They don't have religious wars too..... Christianity is responsible for the crusades after all, so it's hardly without its own flaws. I'm sticking to Christianity, as I said, for a good moral base (The NZ way of Christianity sounds like it's far better than US Christianity- somehow their version is anti-woman and treats God like, well, a god, not Our Father.) But atheists logic and scientific viewpoint is one I admire. I might find this harder if it weren't for how many people on this site take the bible literally word for word..... I mean come on, is there really a red guy with horns who is going to punish you if you do bad deeds? I think "No, that's a metaphor." whereas they think "Of course there is look in the bible blasphemous one!" So my view on the Christian community is not great.

A religion is an organized collection of beliefs, cultural systems, and world views that relate humanity to an order of existence. Many religions have narratives, symbols, and sacred histories that are intended to explain the meaning of life and/or ... to explain the origin of life or the Universe. From their beliefs about the cosmos and human nature, people derive morality, ethics, religious laws or a preferred lifestyle. According to some estimates, there are roughly 4,200 religions in the world.Many religions may have organized behaviors, clergy, a definition of what constitutes adherence or membership, holy places, and scriptures. The practice of a religion may also include rituals, sermons, commemoration or veneration of a deity, gods or goddesses, sacrifices, festivals, feasts, trance, initiations, funerary services, matrimonial services, meditation, prayer, music, art, dance, public service or other aspects of human culture. Religions may also contain mythology   more
16 votes
4 comments
Religion - Voter Comments