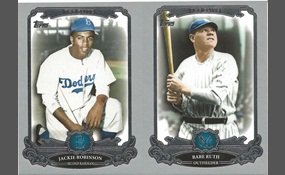 Jack Roosevelt "Jackie" Robinson was an American baseball player who became the first African American to play in Major League Baseball in the modern era. Robinson broke the baseball color line when the Brooklyn Dodgers started him at first base on ... April 15, 1947. As the first major league team to play a black man since the 1880s, the Dodgers ended racial segregation that had relegated black players to the Negro leagues for six decades. The example of Robinson's character, his use of nonviolence, and his unquestionable talent challenged the traditional basis of segregation, which then marked many other aspects of American life, and contributed significantly to the Civil Rights Movement.In addition to his cultural impact, Robinson had an exceptional baseball career. Over 10 seasons, Robinson played in six World Series and contributed to the Dodgers' 1955 World Series championship. He was selected for six consecutive All-Star Games, from 1949 to 1954, was the recipient of the inaugural MLB Rookie of the Year Award in 1947, and won the National League Most Valuable Player Award in 1949—the first black player so honored. Robinson was inducted into the Baseball Hall of Fame in 1962   more
8 votes
2 comments
Jackie Robinson - Voter Comments

George Herman "Babe" Ruth, Jr. Was an American baseball outfielder and pitcher who played 22 seasons in Major League Baseball from 1914 to 1935. Nicknamed "The Bambino" and "The Sultan of Swat", he began his career as a stellar left-handed pitcher f... or the Boston Red Sox, but achieved his greatest fame as a slugging outfielder for the New York Yankees. Ruth established many MLB batting records, including career home runs, slugging percentage, runs batted in, bases on balls, and on-base plus slugging, some of which have been broken. He was one of the first five inductees into the National Baseball Hall of Fame in 1936.At age seven, Ruth was sent to St. Mary's Industrial School for Boys, a reformatory where he learned life lessons and baseball skills from Brother Matthias Boutlier, of the Christian Brothers, the school's disciplinarian and a capable baseball player. In 1914, Ruth was signed to play minor-league baseball for the Baltimore Orioles. Soon sold to the Red Sox, by 1916 he had built a reputation as an outstanding pitcher who sometimes hit long home runs, a feat unusual for any player in the pre-1920 dead-ball era   more
3 votes
2 comments
Babe Ruth - Voter Comments

thehoundsunite says2018-05-24T15:59:58.4669286Z
Report Post
babe ruth is just better with all those runs but you got to give jackie robinson credit for breaking the color barrier with branch rickey
Vote & Comment
Leave a comment...
(Maximum 900 words)