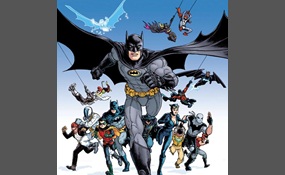 It's the year 2035 and DC announces they are giving the bat family someone to fill the role of their patriarch's (Batmans) wife. Who do you wish this role to be filled by the most?

Someone comic book authors have not created yet.
1 vote
0 comments
An original character. - Voter Comments
No Comments
Vote & Comment
4

Catwoman is a fictional character associated with DC Comics' Batman franchise. Historically a supervillainess and often an antiheroine, the character was created by Bob Kane and Bill Finger, partially inspired by Kane's cousin, Ruth Steel, as well a... s actress Jean Harlow. The original and most widely known Catwoman, Selina Kyle, first appears in Batman #1 in which she is known as The Cat. She is usually depicted as an adversary of Batman, known for having a complex love-hate relationship with him. In her first appearance, she was a whip-carrying burglar with a taste for high-stake thefts. For many years Catwoman thrived, but from September 1954 to November 1966 she took an extended hiatus due to the newly developing Comics Code Authority in 1954. These issues involved the rules regarding the development and portrayal of female characters that were in violation of the Comics Code. Since the 1990s, Catwoman has been featured in an eponymous series that cast her as an antiheroine rather than a traditional villain. The character has been one of Batman's most enduring love interests.A popular figure, Catwoman has been featured in most media adaptations related to Batman   more
1 vote
0 comments
Catwoman - Voter Comments
No Comments
Vote & Comment
6