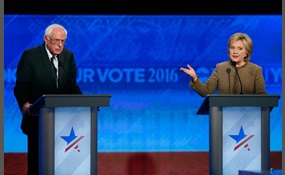 Bernard "Bernie" Sanders is an American politician and the junior United States Senator from Vermont. Before serving in the Senate, he represented Vermont's at-large congressional district in the United States House of Representatives and served as ... mayor of Burlington, the largest city in Vermont. Sanders is a self-described democratic socialist, and has praised Scandinavian-style social democracy.Sanders runs for office as an independent but caucuses with the Democratic Party and is counted as a Democrat for purposes of committee assignments. He was the only independent member of the House during most of his service and is the longest-serving independent in U.S. Congressional history.In an interview with The Nation on March 6, 2014, Sanders stated that he is "prepared to run for President of the United States" in 2016   more
22 votes
4 comments
Bernie Sanders - Voter Comments

Heterodox says2016-03-03T02:49:16.8142463Z
Report Post
Simply because he is not the establishment. He will likely get nothing done as president which is a lot better than getting a lot of the wrong things done. Also, because he, as far as I know, doesn't lie to us every single time he opens his mouth.

DeepInThought says2016-03-06T17:54:19.4733345Z
Report Post
He is honest, isn't in the pockets of the corporations was fighting for civil rights back when Hillary was trying to get Goldwater (an anti civil rights politician) elected Bernie has always been for LGBT rights, where as Hillary was against giving the LGBT community equal rights until 2013. many news castors say that He is unelectable but if this poll tells us anything, it is that that is not the case... the democratic establishment has used every dirty trick that they have, (such as using the media to 1st ignore him,2nd call him crazy, 3rd call him unelectable and spin the facts to help Hillary, then they had questionable results in Iowa, and theirs always the super delegates all over) and still Bernie is doing well. his biggest problem is the super delegates, who are comprised largely of the lobbyist and corrupt politicians that he is speaking out against, but if Bernie Sanders can get past that, then he will have a fairly easy time beating Trump. If the elite of the party does stop him (with him winning the majority vote, then they will be committing political suicide by, not only pissing off a lot of their party, but also by loosing the independents, that Bernie has backing him, to the only other non establishment choice their is, and that is sadly Donald Trump. If the democrats don't want to see Trump in office, they will have to choose Bernie, because he and Trump are the only ones who have tapped into the outrage of the American People.
Vote & Comment
2

Hillary Diane Rodham Clinton is a former United States Secretary of State, U.S. Senator, and First Lady of the United States. From 2009 to 2013, she was the 67th Secretary of State, serving under President Barack Obama. She previously represented Ne... w York in the U.S. Senate. Before that, as the wife of President Bill Clinton, she was First Lady from 1993 to 2001. In the 2008 election, Clinton was a leading candidate for the Democratic presidential nomination.A native of Illinois, Hillary Rodham was the first student commencement speaker at Wellesley College in 1969 and earned a J.D. From Yale Law School in 1973. After a brief stint as a Congressional legal counsel, she moved to Arkansas and married Bill Clinton in 1975. Rodham cofounded Arkansas Advocates for Children and Families in 1977. In 1978, she became the first female chair of the Legal Services Corporation, and in 1979, the first female partner at Rose Law Firm. The National Law Journal twice listed her as one of the hundred most influential lawyers in America. As First Lady of Arkansas from 1979 to 1981 and 1983 to 1992 with her husband as Governor, she led a task force that reformed Arkansas's education system   more
6 votes
3 comments
Hillary Rodham Clinton - Voter Comments

rcavlytle says2016-03-03T01:54:24.7242359Z
Report Post
Listen, I love Bernie Sanders. Who doesn't? But Hillary Clinton is simply more electable than Senator Sanders. They agree on almost every single issue, and will be basically the same president once in office, but Hillary will most likely win against the Republican candidate, and I can't say the same for Bernie Sanders. Honestly, though, I am conflicted.

Heterodox says2016-03-03T13:29:49.5000904Z
Report Post
@rcavlytle I disagree on both fronts. I think bernie actually has a higher chance of winning vs Trump and a higher chance of pulling independents/undecided vs Hillary. And I am not sure they (bernie vs hillary) agree on every single issue. Just watch Bernie's face in the debates when Hillary speaks, it's quite hilarious.