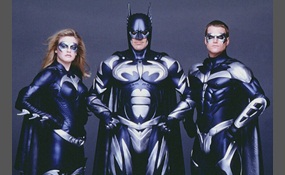 Michael John Douglas, better known by his stage name Michael Keaton, is an American actor, comedian, producer, and director. He became popular for his early comedic film roles, notably for his performance as the title character of Tim Burton's Beetl... ejuice, and later gained international fame for his dramatic portrayal of Bruce Wayne / Batman in Tim Burton's Batman and Batman Returns. Other notable films of his include Night Shift, Mr. Mom, Clean and Sober, Pacific Heights, and Jackie Brown, as well as providing voices for characters in the Pixar films Cars and Toy Story 3. He later won critical acclaim in the 2014 film Birdman   more
7 votes
2 comments
Michael Keaton - Voter Comments

Let's face it, you haven't seen Batman and me in the same room now have you?
7 votes
1 comment
PetersSmith - Voter Comments

Christian Charles Philip Bale is an English actor. He has starred in both blockbuster films and smaller projects from independent producers and art houses.Bale first caught the public eye at the age of 13, when he was cast in the starring role of St... even Spielberg's Empire of the Sun. Based on the original story by J. G. Ballard, Bale played an English boy who is separated from his parents and subsequently finds himself lost in a Japanese internment camp during World War II. In 2000, he garnered critical acclaim for his portrayal of serial killer Patrick Bateman in American Psycho. He is known for going to great lengths to portray characters in film, notably for The Machinist, where he lost 63 pounds to play the role of Trevor Reznik.Bale went on to receive greater commercial recognition and acclaim for his performance as Bruce Wayne/Batman in Christopher Nolan's Batman Begins, The Dark Knight and The Dark Knight Rises   more
1 vote
0 comments
Christian Bale - Voter Comments
No Comments
Vote & Comment
6

William West "Bill" Anderson, better known by his stage name Adam West, is an American actor. He is best known for the title role in the 1960s ABC series Batman and its theatrical feature film. He has done voice work on animated series such as The F... airly OddParents and Family Guy, in both of which he voices fictional versions of himself   more
1 vote
1 comment
Adam West - Voter Comments

Val Edward Kilmer is an American actor. Originally a stage actor, Kilmer became popular in the mid-1980s after a string of appearances in comedy films, starting with Top Secret!, then the cult classic Real Genius, as well as the blockbuster action f... ilm Top Gun and the swords and sorcery fantasy film Willow.Some of his notable film roles include Jim Morrison in Oliver Stone's The Doors, Doc Holliday in the Western Tombstone, armed robber Chris Shiherilis in Michael Mann's crime saga Heat, Bruce Wayne/Batman in Joel Schumacher's Batman Forever, Simon Templar in The Saint and a meth-using informant in the 2002 crime thriller The Salton Sea   more
1 vote
0 comments
Val Kilmer - Voter Comments
No Comments
Vote & Comment
8

George Timothy Clooney is an American actor, filmmaker and activist. He has received three Golden Globe Awards for his work as an actor and two Academy Awards, one for acting and the other for producing.Clooney made his acting debut on television in...  1978, and later gained wide recognition in his role as Dr. Doug Ross on the long-running medical drama ER from 1994 to 1999, for which he received two Emmy Award nominations. While working on ER, he began attracting a variety of leading roles in films, including Batman & Robin and Out of Sight, in which he first worked with long-time collaborator Steven Soderbergh. In 1999, Clooney took the lead role in Three Kings, a well-received war satire set during the Gulf War. In 2001, Clooney's fame widened with the release of his biggest commercial success, Ocean's Eleven, the first of the film trilogy, a remake of the 1960 film with Frank Sinatra as Danny Ocean. He made his directorial debut a year later with the biographical thriller Confessions of a Dangerous Mind, and has since directed Good Night, and Good Luck, Leatherheads, The Ides of March, and The Monuments Men   more
1 vote
0 comments
George Clooney - Voter Comments
No Comments
Vote & Comment
9

Rino Romano is a Canadian voice actor who has portrayed Batman in the animated TV series The Batman, Spider-Man in the animated TV series Spider-Man Unlimited, Eduardo Rivera in Extreme Ghostbusters, Luis Sera in Resident Evil 4, and the original Tu... xedo Mask in the English dub of the anime series Sailor Moon.Romano provided voice narration for the PBS series Curious George, as well as previews on NBC, The WB, and The CW   more
0 votes
0 comments
Rino Romano - Voter Comments
No Comments
Vote & Comment
10

Karl Diedrich Bader is an American actor and comedian who has done supporting roles in comedies such as Office Space, Napoleon Dynamite, The Drew Carey Show and the Outsourced TV series. He is also a voice-over artist for animation shows; some of hi... s roles include: Batman on Batman: The Brave and the Bold and JLA Adventures: Trapped in Time, android Zeta in The Zeta Project, Warp Darkmatter in Buzz Lightyear of Star Command, the Fiskerton Phantom in The Secret Saturdays, and his recurring role as Hoss Delgado in The Grim Adventures of Billy and Mandy   more
0 votes
0 comments
Diedrich Bader - Voter Comments
No Comments
Vote & Comment
11

William Emerson "Will" Arnett is a Canadian actor and comedian known for his many roles, including George Oscar "G.O.B." Bluth II in the Fox series Arrested Development, Devon Banks in the NBC series 30 Rock, Brent Wilts in the IFC series The Increa... singly Poor Decisions of Todd Margaret, Chris Brinkley on Up All Night and Nathan Miller in the CBS series The Millers. He has appeared in films such as Monster-in-Law, Semi-Pro, Blades of Glory, RV, Hot Rod, Let's Go to Prison, The Brothers Solomon and Teenage Mutant Ninja Turtles. Arnett is also a voice actor for commercials, animated films, television cartoons and video games   more
0 votes
0 comments
Will Arnett - Voter Comments
No Comments
Vote & Comment
15

Peter Frederick Weller, Ph.D. Is an American film and stage actor, director and history lecturer.Weller has appeared in more than 70 films and television series, including turns as the title characters in blockbuster hits RoboCop and RoboCop 2, and ... the cult classic The Adventures of Buckaroo Banzai Across the 8th Dimension. He has also appeared in such critically acclaimed films as Woody Allen's Mighty Aphrodite, the Oliver Stone-produced The New Age and David Cronenberg's movie of William Burroughs's novel Naked Lunch. He received an Academy Award nomination for his direction of the 1993 short Partners, in which he also acted. In television, he hosted the show Engineering an Empire on the History Channel. He also played Christopher Henderson in the fifth season of 24 and Stan Liddy in the fifth season of the Showtime original series Dexter   more
0 votes
0 comments
Peter Weller - Voter Comments
No Comments
Vote & Comment
16