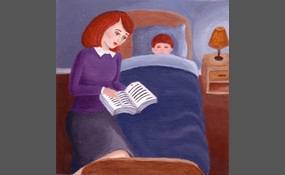 Out of the ones provided, what is the best story to help an unruly child sleep?

Warhammer 40,000 is a tabletop miniature wargame produced by Games Workshop, set in a dystopian science-fantasy universe. Warhammer 40,000 was created by Rick Priestley in 1987 as the futuristic companion to Warhammer Fantasy Battle, sharing many ga... me mechanics. Expansions for Warhammer 40,000 are released periodically which give rules for urban, planetary siege and large-scale combat. The game is in its seventh edition, which was released on May 24, 2014.Players can assemble and paint individual, 28-millimetre scale miniature figures that represent futuristic soldiers, creatures and vehicles of war. These figurines are collected to compose squads in armies that can be pitted against those of other players. Each player brings a roughly equal complement of units to a tabletop battlefield with handmade or purchased terrain. The players then decide upon a scenario, ranging from simple skirmishes to complex battles involving defended objectives and reinforcements. The models are physically moved around the table and the actual distance between models plays a role in the outcome of combat. Play is turn-based, with various outcomes determined by tables and the roll of dice   more
1 vote
1 comment
Warhammer 40,000 - Voter Comments

Bokurano: Ours is a Japanese science fiction manga by Mohiro Kitoh that was serialized in the monthly manga magazine Ikki from 2003 to 2009; 11 tankōbon have been published by Shogakukan. It is about a group of middle-school students who unwillingly...  assume the task of piloting a giant mecha named Zearth in a series of battles against mechas from parallel worlds, where the survival of Earth is dependent on their continuing to win at the cost of the life of the pilot of each battle.The series has been adapted as an anime television series directed by Hiroyuki Morita and produced by Gonzo that aired in 2007, and a light novel series called Bokura no: Alternative with an alternative story by Renji Ōki and character designs by Kitoh himself. The manga is licensed in English by Viz Media, which began serializing it in the online English version of Ikki on July 23, 2009; the first print volume was published in February 2010   more
0 votes
0 comments
Bokurano: Ours - Voter Comments
No Comments
Vote & Comment
4

The King in Yellow

The King in Yellow is a book of short stories by American writer Robert W. Chambers, first published by F. Tennyson Neely in 1895. The book is named after a fictional play with the same title which recurs as a motif through some of the stories. The ... first half of the book features highly esteemed weird stories, and the book has been described by critics such as E. F. Bleiler, S.T. Joshi, and T. E. D. Klein as a classic in the field of the supernatural. There are ten stories, the first four of which, "The Repairer of Reputations", "The Mask", "In the Court of the Dragon" and "The Yellow Sign", mention The King in Yellow, a forbidden play which induces despair or madness in those who read it. "The Yellow Sign" inspired a film of the same name released in 2001. The British first edition was published by Chatto & Windus in 1895   more
0 votes
0 comments
The King in Yellow - Voter Comments
No Comments
Vote & Comment
5

Anything by H. P. Lovecraft

Howard Phillips Lovecraft — known as H.P. Lovecraft — was an American author who achieved posthumous fame through his influential works of horror fiction. Virtually unknown and only published in pulp magazines before he died in poverty, he is now re... garded as one of the most significant 20th-century authors in his genre.Lovecraft was born in Providence, Rhode Island, where he spent most of his life. His father was confined to a mental institution when Lovecraft was three years old. His grandfather, a wealthy businessman, enjoyed storytelling and was an early influence. Intellectually precocious but sensitive, Lovecraft began composing rudimentary horror tales by the age of eight, but suffered from overwhelming feelings of anxiety. He encountered problems with classmates in school, and was kept at home by his highly strung and overbearing mother for illnesses that may have been psychosomatic. In high school, Lovecraft was able to better connect with his peers and form friendships. He also involved neighborhood children in elaborate make-believe projects, only regretfully ceasing the activity at seventeen years old   more
0 votes
0 comments
Anything by H. P. Lovecraft - Voter Comments
No Comments
Vote & Comment
Leave a comment...
(Maximum 900 words)