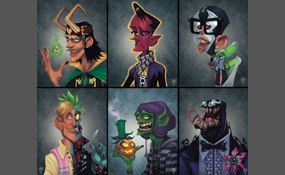 Can't be bothered to fill this out anymore

Thomas William "Tom" Hiddleston is an English actor. He is known for playing the character of Loki in the Marvel Studios films Thor, The Avengers, and Thor: The Dark World. He has also appeared in Steven Spielberg's First World War film War Horse, T... he Deep Blue Sea, Woody Allen's romantic comedy Midnight in Paris, the 2012 BBC series Henry IV, Henry V, and the romantic vampire film Only Lovers Left Alive. In theatre, he has been in the productions of Cymbeline and Ivanov. In December 2013 he starred as the title character in the Donmar Warehouse production of Coriolanus which played until February 2014.He won the Laurence Olivier Award for Best Newcomer in a Play for his role in Cymbeline while also being nominated for the same award the same year for his role of Cassio in Othello. In 2011 he won the Empire Award for Best Male Newcomer and nominated for the BAFTA Rising Star Award for his role in Thor. He won the MTV Movie Award for Best Fight and Best Villain in 2013 for his role in The Avengers   more
1 vote
1 comment
"Loki" Tom Hiddleston - Voter Comments

Windows Vista is an operating system by Microsoft for use on personal computers, including home and business desktops, laptops, tablet PCs, and media center PCs. Prior to its announcement on July 22, 2005, Windows Vista was known by its codename "Lo... nghorn". Development was completed on November 8, 2006, and over the following three months, it was released in stages to computer hardware and software manufacturers, business customers and retail channels. On January 30, 2007, it was released worldwide and was made available for purchase and download from Microsoft's website. The release of Windows Vista came more than five years after the introduction of its predecessor, Windows XP, the longest time span between successive releases of Microsoft Windows desktop operating systems. It was succeeded by Windows 7, which was released to manufacturing on July 22, 2009 and released worldwide for retail on October 22, 2009.New features of Windows Vista include an updated graphical user interface and visual style dubbed Aero, a new search component called Windows Search, redesigned networking, audio, print and display sub-systems, and new multimedia tools including Windows DVD Maker   more
1 vote
0 comments
Windows Vista - Voter Comments
No Comments
Vote & Comment
6