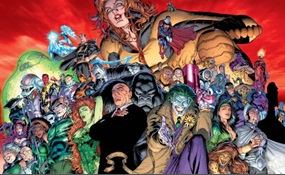 Not all are on their. Will ADD to list

Ultron is a fictional character, a supervillain that appears in comic books published by Marvel Comics. He is most recognized as a foe of the Avengers, and has a quasi-familial relationship with several of their members, especially his creator Hank ... Pym. He was the first Marvel Comics character to wield the fictitious metal alloy adamantium.Ultron has appeared in several media adaptations, including animated television series, an animated film, and video games. The character will be portrayed by James Spader in the 2015 film Avengers: Age of Ultron   more
4 votes
0 comments
Ultron - Voter Comments
No Comments
Vote & Comment
3

Thanos is a fictional comic book character, a supervillain that has appeared in books published by Marvel Comics. The character first appeared in Iron Man #55 and was created by writer-artist Jim Starlin. Debuting in the Bronze Age of Comic Books, t... he character has been featured in over four decades of Marvel continuity and a self-titled series. Thanos has appeared in other Marvel-endorsed products, including animated television series, arcade and video games, toys and trading cards. Thanos appears in the Marvel Cinematic Universe in a non-speaking cameo at the end of the 2012 film The Avengers, and Josh Brolin portrays him in 2014's Guardians of the Galaxy and will reprise the role for future films. Thanos was ranked number 47 on IGN's top 100 comic book villains of all time   more
3 votes
0 comments
Thanos - Voter Comments
No Comments
Vote & Comment
4

Alexander Joseph "Lex" Luthor is a fictional character, a supervillain appearing in comic books published by DC Comics. Lex Luthor is the archenemy of Superman, though given his high status as a supervillain, he also comes into conflict with Batman ... and other superheroes in the DC Universe. Created by Jerry Siegel and Joe Shuster, the character first appeared in Action Comics #23. Luthor is a wealthy, power-mad business magnate, one of the most intelligent beings in the DC Universe, and has incredible technological prowess. Lex Luthor's goals typically center on killing Superman, the foremost obstacle to achieving the villain's megalomaniacal goals. Despite periodically wearing a powered exoskeleton, Luthor has traditionally lacked superpowers or a dual identity. Lex Luthor has carefully crafted his public persona in order to avoid suspicion and arrest. He is well known for his philanthropy, donating millions of dollars to Metropolis over the years, funding parks, foundations, and charities.Lex Luthor typically appears in comic books and other media as a business magnate with a bald head   more
1 vote
0 comments
Lex Luthor - Voter Comments
No Comments
Vote & Comment
7

Black Adam is a fictional comic book supervillain, appearing in publications and other properties of DC Comics; he is a primary adversary of the superhero Shazam, formerly known as Captain Marvel. Black Adam was created by Otto Binder & C. C. Beck i... n 1945 as a one-shot villain for the first issue of Fawcett Comics' The Marvel Family comic book; however, Black Adam was revived as a recurring character after DC Comics first licensed and then acquired the Fawcett characters and began publishing Captain Marvel/Marvel Family stories under the title Shazam! In the 1970s.As originally depicted, Black Adam was a corrupted, ancient Egyptian predecessor of Captain Marvel, who fought his way to modern times to challenge the hero and his Marvel Family associates. Since the turn of the 21st century, however, Black Adam has been re-defined by DC Comics writers Jerry Ordway, Geoff Johns, and David S. Goyer as a corrupted antihero attempting to "clear his name". Featured roles in such comic book series as Justice Society of America, Villains United, Infinite Crisis, and 52 have elevated the character to an unprecedented level of prominence in the overall "universe" of DC Comics characters   more
0 votes
0 comments
Black Adam - Voter Comments
No Comments
Vote & Comment
8

Loki is a fictional character, a supervillain and sometime anti-hero that appears in comic books by Marvel Comics. He is the adoptive brother and archenemy of Thor. He is based on the being of the same name from Norse mythology. The character first ... appeared historically in Venus No. 6 and in modern day in Journey into Mystery No. 85. The character was created by writer Stan Lee, scripter Larry Lieber, and penciller Jack Kirby.Loki has appeared in several ongoing series, limited series and alternate reality series, including his own 4-issue series Loki. He appeared in the new issues of Young Avengers in 2013. He will appear in his solo series Loki: Agent of Asgard in 2014. The character has also appeared in associated Marvel merchandise including animated television series, clothing, toys, video games, and movies.In 2009, Loki was ranked as IGN's 8th Greatest Comic Book Villain of All Time.Tom Hiddleston first portrayed Loki in the 2011 live action film Thor then again in The Avengers, Thor: The Dark World, Avengers: Age of Ultron and Thor: Ragnarok   more
0 votes
0 comments
Loki - Voter Comments
No Comments
Vote & Comment
9

Darkseid is a fictional character, supervillain who appears in comic books published by DC Comics. He first appeared in Superman's Pal Jimmy Olsen #134 and was created by writer-artist Jack Kirby. Darkseid is one of the most powerful and evil charac... ters in the DC Universe. Debuting in the Silver Age of Comic Books, he has appeared in four decades of DC Comics publications, featuring prominently in the New Gods titles and limited series as the nemesis of the New Gods and Superman. He has also been associated with DC Comics merchandise including animated television series, toys, trading cards and video games. Darkseid was ranked number 6 on IGN's top 100 comic book villains of all time   more
0 votes
0 comments
Darkseid - Voter Comments
No Comments
Vote & Comment
Leave a comment...
(Maximum 900 words)