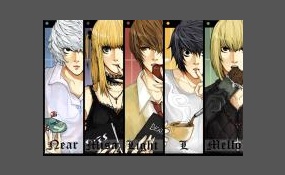 L Lawliet, exclusively known by the mononym L, is a fictional character in the manga and anime series Death Note. He is an eccentric genius and international private detective, reputed to be the world's greatest, who takes on cases that have stymied...  national governments and Interpol. He opposes the machinations of Light Yagami, otherwise known as the mass-murderer "Kira". L is voiced by Kappei Yamaguchi and Alessandro Juliani, respectively, in the Japanese and English versions of the anime. The character has been praised by several manga and anime reviewers.L often uses dramatic strategies to confuse his opponents and force their hand. He eats sweet things exclusively, and is usually seen eating fruit or cake, or drinking sweetened coffee or tea. L's behavior is also peculiar: he sits in an unusual position, and always wears the same outfit. He holds things extremely delicately, by corners, and has a habit of biting his thumb. He has at least three aliases, including those of the world's so-called second and third greatest detectives, Eraldo Coil and Deneuve. In the light novel Another Note, it's said that L won these aliases in a "detective war" with the real Coil and Deneuve   more
8 votes
2 comments
L - Voter Comments

Light Yagami, also known as Kira, is a fictional character in the manga and anime series Death Note. He is a bored young genius who finds the Death Note dropped by the Shinigami Ryuk by pure chance.In the anime adaptation, he is voiced by Mamoru Miy... ano in Japanese, and by Brad Swaile in English; in the live-action film series, he is portrayed by Tatsuya Fujiwara   more
3 votes
0 comments
Light Yagami - Voter Comments
No Comments
Vote & Comment
3

Mihael Keehl, universally referred to by the mononym Mello, is a fictional character in the manga and anime series Death Note. Mello is introduced alongside Near as a potential substitute for L. Both Mello and Near were raised at Wammy's House, an o... rphanage established by Watari, L's assistant. However, Mello refuses to work with Near to capture a murderer dubbed "Kira". Over the course of Death Note, he joins the mafia, obtains a Death Note, causes the death of some people, and dies before can expose Kira's identity. Mello has also appeared in other media from the series, including video games, and light novels.The character of Mello was created, along with Near, to break the endless cycle of confrontations between the detective L and Light Yagami, the persona behind Kira. Both Mello and Near were designed after L, and were initially envisioned as twins and sons of L. Ultimately, this idea was dropped, with their designs switched compared to the original concept. He is voiced in the Japanese series by Nozomu Sasaki and in the English adaptation by David Hurwitz. Merchandise has been created for the character, including plush dolls and action figures. Mello has received mixed commentary by manga and anime publications   more
0 votes
0 comments
Mello - Voter Comments
No Comments
Vote & Comment
6

Nate River, universally referred to by the mononym Near, is a fictional character in the manga and anime series Death Note. Near is the younger of the two successors of L who was investigating the methods and identity of Kira, the in-universe name g... iven to the mysterious serial killer who murdered criminals by means of the eponymous Death Note. He becomes the leader of the SPK, an organization that looks into the Kira case, and in the end, succeeds in uncovering Kira's identity. He is voiced by Noriko Hidaka in the Japanese version anime, and Cathy Weseluck in the English dubbed version of the anime   more
0 votes
0 comments
Near - Voter Comments
No Comments
Vote & Comment
8