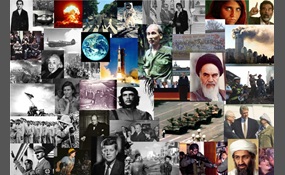 The 2000s was a decade that began on January 1, 2000, and ended on December 31, 2009.The decade generally continued the technological and socioeconomic changes that started in the 1980s and accelerated in the 1990s. Globalization had accelerated in ... the 1990s after the fall of Communism and continued to be a force in the 2000s, though its effect may have been influenced by the Great Recession.The growth of the Internet was one of the prime contributors to globalization during the decade, making it possible for people to interact with other people, express ideas, introduce others to different cultures and backgrounds, use goods and services, sell and buy online, and research and learn.The economic growth of the 2000s had considerable environmental consequences, raised demand for diminishing energy resources, and was still shown to be vulnerable as demonstrated during the Global Financial Crisis of the late 2000s.The term "two-thousands" can also equally be used for the years 2000 to 2009. For another period of time during the 2000s, the 201st decade began on January 1, 2001, which was also the beginning of the 21st century and 3rd millennium   more
4 votes
1 comment
2000s - Voter Comments

The 1970s, pronounced "the Nineteen Seventies", refers to a decade within the Gregorian calendar that began on January 1, 1970, and ended on December 31, 1979.In the 21st century historians have increasingly portrayed the decade as a "pivot of chang... e" in world history focusing especially on the economic upheavals. In the Western world, social progressive values that began in the 1960s, such as increasing political awareness and political and economic liberty of women, continued to grow. In the United Kingdom the 1979 elections resulted in the victory of its Conservative Party under Margaret Thatcher, the first and to date only female British Prime Minister. Industrialized countries, except Japan, experienced an economic recession due to an oil crisis caused by oil embargoes by the Organization of Arab Petroleum Exporting Countries. The crisis saw the first instance of stagflation which began a political and economic trend of the replacement of Keynesian economic theory with neoliberal economic theory, with the first neoliberal governments being created in Chile, where a military coup led by Augusto Pinochet took place in 1973   more
2 votes
0 comments
1970s - Voter Comments
No Comments
Vote & Comment
3

The 1980s was a decade that began on January 1, 1980, and ended on December 31, 1989.The time period saw great social, economic, and general change as wealth and production migrated to newly industrializing economies. As economic liberalization incr... eased in the developed world, multiple multinational corporations associated with the manufacturing industry relocated into Thailand, Mexico, South Korea, Taiwan, and China. Japan and West Germany are the most notable developed countries that continued to enjoy rapid economic growth during the decade; Japan's would stall by the early 1990s.The United Kingdom and the United States moved closer to laissez-faire economic policies beginning a trend towards neoliberalism that would pick up more steam in the following decade as the fall of the USSR made right wing economic policy more popular.Developing countries across the world faced economic and social difficulties as they suffered from multiple debt crises in the 1980s, requiring many of these countries to apply for financial assistance from the International Monetary Fund and the World Bank   more
2 votes
1 comment
1980s - Voter Comments

The 1940s was a decade that began on January 1, 1940 and ended on December 31, 1949.Most of the Second World War took place in the first half of the decade, which had a profound effect on most countries and people in Europe, Asia, and elsewhere. The...  consequences of the war lingered well into the second half of the decade, with a war-weary Europe divided between the jostling spheres of influence of the West and the Soviet Union, leading to the beginning of the Cold War. To some degree internal and external tensions in the post-war era were managed by new institutions, including the United Nations, the welfare state and the Bretton Woods system, facilitating the post–World War II boom, which lasted well into the 1970s. However the conditions of the post-war world encouraged decolonialization and emergence of new states and governments, with India, Pakistan, Israel, Vietnam and others declaring independence, although rarely without bloodshed. The decade also witnessed the early beginnings of new technologies, often first developed in tandem with the war effort, and later adapted and improved upon in the post-war era   more
1 vote
1 comment
1940s - Voter Comments

The 1950s or the Fifties was a decade that began on January 1, 1950 and ended on December 31, 1959. By its end, the world had largely recovered from World War II and the Cold War developed from its modest beginning in the late 1940s to a hot competi... tion between the United States and the Soviet Union by the beginning of the 1960s.Clashes between communism and capitalism dominated the decade, especially in the Northern Hemisphere. The conflicts included the Korean War in the beginnings of the decade and the beginning of the Space Race with the launch of Sputnik I. Along with increased testing of nuclear weapons, this created a politically conservative climate. In the United States, the The Second Red Scare caused public Congressional hearings by both houses in Congress and anti-communism was the prevailing sentiment in the United States throughout the decade. The beginning of decolonization in Africa and Asia occurred in this decade and accelerated in the following decade, the 1960s   more
1 vote
0 comments
1950s - Voter Comments
No Comments
Vote & Comment
6

The 1960s was a decade that began on 1 January 1960 and ended on 31 December 1969. The 1960s term also refers to an era more often called The Sixties, denoting the complex of inter-related cultural and political trends across the globe. This "cultur... al decade" is more loosely defined than the actual decade, beginning around 1963 and ending around 1974."The Sixties", as they are known in both scholarship and popular culture, is a term used by historians, journalists, and other objective academics; in some cases nostalgically to describe the counterculture and revolution in social norms about clothing, music, drugs, dress, formalities, and schooling. Conservatives denounce the decade as one of irresponsible excess, flamboyance, and decay of social order. The decade was also labeled the Swinging Sixties because of the fall or relaxation of social taboos especially relating to racism and sexism that occurred during this time.The 1960s became synonymous with the new, radical, and subversive events and trends of the period. In Africa the 1960s was a period of radical political change as 32 countries gained independence from their European colonial rulers   more
1 vote
1 comment
1960s - Voter Comments

The 1990s, pronounced "nineteen-nineties" or abbreviated as "nineties", was a decade that began on 1 January 1990, and ended on 31 December 1999.Culturally, the 1990s was characterized by the rise of multiculturalism and alternative media, which con... tinued into the 2000s. Movements such as grunge, the rave scene and hip hop spread around the world to young people during the decade, aided by then-new technology such as cable television and the Internet.A combination of factors, including the continued mass mobilization of capital markets through neoliberalism, the thawing of the decades-long Cold War, the beginning of the widespread proliferation of new media such as the Internet from the middle of the decade onwards, increasing skepticism towards government, and the dissolution of the Soviet Union led to a realignment and reconsolidation of economic and political power across the world and within countries. Many countries such as Canada and Sweden privatized much of their economy, moving power away from governments, and more towards private corporations. The dot com bubble of 1997–2000 brought wealth to some entrepreneurs before its crash in 2000–2001   more
0 votes
0 comments
1990s - Voter Comments
No Comments
Vote & Comment
No comments yet.
Leave a comment...
(Maximum 900 words)
Privacy Policy | Terms of Use
Sitemap | View Desktop Version
©2021 Debate.org. All rights reserved.