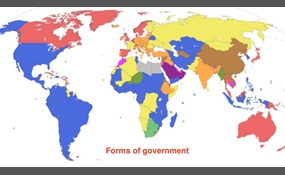 Vote for what you think is the best form of government. Feel free to add a new answer with a short description.

None. They all are flawed

4 votes
1 comment
None. They all are flawed - Voter Comments

Philosopher kings [Epistocracy] are the rulers of Plato's Utopian Kallipolis. If his ideal city-state is to ever come into being, "philosophers [must] become kings…or those now called kings [must]…genuinely and adequately philosophize" (The Republic... , 5.473d). (Wikipedia   more
4 votes
0 comments
Epistocracy (Philosopher king) - Voter Comments
No Comments
Vote & Comment
4

Democracy is a form of government in which all eligible citizens participate equally - either directly or indirectly through elected representatives - in the proposal, development, and creation of laws. (Wikipedia)
4 votes
1 comment
Democracy - Voter Comments

Minarchism (also known as minimal statism) is a political philosophy. It is variously defined by sources. In the strictest sense, it holds that states ought to exist (as opposed to anarchy), that their only legitimate function is the protection of i... ndividuals from aggression, theft, breach of contract, and fraud, and that the only legitimate governmental institutions are the military, police, and courts. In the broadest sense, it also includes fire departments, prisons, the executive, and legislatures as legitimate government functions. (Wikipedia   more
2 votes
0 comments
Minarchism - Voter Comments
No Comments
Vote & Comment
6

A dictatorship is an autocratic or authoritarian form of government in which a government is ruled by an individual: a Dictator as in an oligarchy. It is an autocratic form of absolute rule by leadership unrestricted by law, constitutions, or other ... social and political factors within the state. A dictatorship can be a government controlled by one person, or a small group of people. In this form of government the power rests entirely on the person or group of people, and can be obtained by force or by inheritance. The dictator(s) may also take away much of its peoples' freedom. (Wikipedia   more
2 votes
1 comment
Dictatorship - Voter Comments

Kerfluffer says2014-04-01T11:24:13.0147355-05:00
Report Post
Only assuming that the dictator is perfect as a ruler. He would exert justice when he should, and show mercy to those who deserve it. He would punish people who find legal loopholes, and pardon or even reward people who break laws when it is right to do so.
Vote & Comment
7

Theocracy is a form of government in which a deity is officially recognized as the civil Ruler and official policy is governed by officials regarded as divinely guided, or is pursuant to the doctrine of a particular religion or religious group. (Wik... ipedia   more
2 votes
1 comment
Theocracy - Voter Comments

Communism (from Latin communis – common, universal) is a classless, moneyless, and stateless social order structured upon common ownership of the means of production, as well as a social, political and economic ideology and movement that aims at the...  establishment of this social order. (Wikipedia   more
1 vote
1 comment
Communism - Voter Comments

Lemonfiz says2014-04-02T12:32:02.9709171-05:00
Report Post
Communism is the basic government of any community society. It was the government of the apostles, and first generation colonies as well as first generation civilization. Everyone's needs are met equally and fairly and the community works together towards the common good of society as well as all who are apart of it i.e. the individual.
Vote & Comment
9

A regional state is a unitary state in which authority has been decentralized to subnational regions. This term has yet to become widely used. Subnational regions are intermediate level between local and national government.From Wikipedia, the free ... encyclopedi   more
1 vote
0 comments
Regional state - Voter Comments
No Comments
Vote & Comment
12

Cronyism is partiality to long-standing friends, especially by appointing them to positions of authority, regardless of their qualifications. Hence, cronyism is contrary in practice and principle to meritocracy. Cronyism exists when the appointer an... d the beneficiary are in social contact; often, the appointer is inadequate to hold his or her own job or position of authority, and for this reason the appointer appoints individuals who will not try to weaken him or her, or express views contrary to those of the appointer. Politically, "cronyism" is derogatorily used.From Wikipedia, the free encyclopedi   more
0 votes
0 comments
Cronyism - Voter Comments
No Comments
Vote & Comment
13

Aristocracy is a form of government in which power is in the hands of a small, privileged, ruling class. The term derives from the Greek aristokratia, meaning "rule of the best". At the time of the word's origins in Ancient Greece, it was conceived ... as rule by the best qualified citizens and was often contrasted favourably with monarchy, the rule of a single individual. In later times, aristocracy was usually seen as rule by a privileged group, the aristocratic class, and was contrasted with democracy. (Wikipedia   more
0 votes
0 comments
Aristocracy - Voter Comments
No Comments
Vote & Comment
14

A monarchy is a form of government in which sovereignty is actually or nominally embodied in a single individual. Forms of monarchy differ widely based on the level of legal autonomy the monarch holds in governance, the method of selection of the mo... narch, and any predetermined limits on the length of their tenure. When the monarch has no or few legal restraints in state and political matters, it is called an absolute monarchy and is a form of autocracy. Cases in which the monarch's discretion is formally limited are called constitutional monarchies. In hereditary monarchies, the office is passed through inheritance within a family group, whereas elective monarchies use some system of voting. Each of these has variations: in some elected monarchies only those of certain pedigrees are eligible, whereas many hereditary monarchies impose requirements regarding the religion, age, gender, mental capacity, and other factors. Occasionally this might create a situations of rival claimants whose legitimacy is subject to effective election. Finally, there have been cases where the term of a monarch’s reign is either fixed in years or continues until certain goals are achieved: an invasion being repulsed, for instance. Thus there are widely divergent structures and traditions defining monarchy   more
0 votes
0 comments
Monarchy - Voter Comments
No Comments
Vote & Comment
18