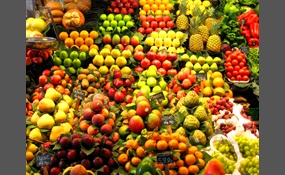 Tomato is a fruit 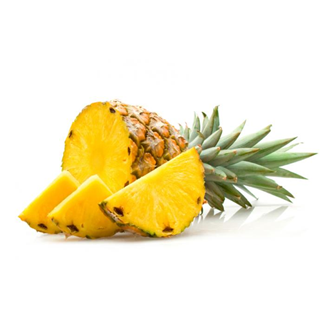 The pineapple is a tropical plant with edible multiple fruit consisting of coalesced berries, and the most economically significant plant in the Bromeliaceae family. Pineapples may be cultivated from a crown cutting of the fruit, possibly flowering in 20–24 months and fruiting in the following six months. Pineapple does not ripen significantly post-harvest.Pineapples are consumed fresh, cooked, juiced, and preserved, and are found in a wide array of cuisines. In addition to consumption, the pineapple leaves are used to produce the textile fiber piña in the Philippines, commonly used as the material for the men's Barong Tagalog and women's Baro't saya formal wear in the country. The fiber is also used as a component for wallpaper and other furnishings. 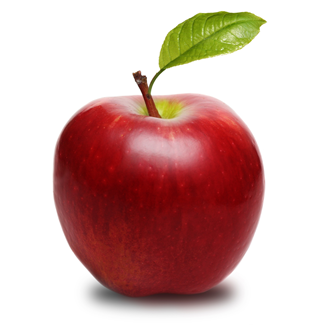 The apple tree is a deciduous tree in the rose family best known for its sweet, pomaceous fruit, the apple. It is cultivated worldwide as a fruit tree, and is the most widely grown species in the genus Malus. The tree originated in Central Asia, where its wild ancestor, Malus sieversii, is still found today. Apples have been grown for thousands of years in Asia and Europe, and were brought to North America by European colonists. Apples have religious and mythological significance in many cultures, including Norse, Greek and European Christian traditions.Apple trees are large if grown from seed, but small if grafted onto roots. There are more than 7,500 known cultivars of apples, resulting in a range of desired characteristics. Different cultivars are bred for various tastes and uses, including cooking, eating raw and cider production. Apples are generally propagated by grafting, although wild apples grow readily from seed. Trees and fruit are prone to a number of fungal, bacterial and pest problems, which can be controlled by a number of organic and non-organic means. 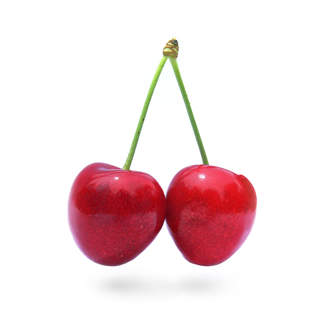 The cherry is the fruit of many plants of the genus Prunus, and is a fleshy drupe. The cherry fruits of commerce are usually obtained from a limited number of species such as cultivars of the sweet cherry, Prunus avium. The name 'cherry' also refers to the cherry tree, and is sometimes applied to almonds and visually similar flowering trees in the genus Prunus, as in "ornamental cherry", "cherry blossom", etc. Wild Cherry may refer to any of the cherry species growing outside of cultivation, although Prunus avium is often referred to specifically by the name "wild cherry" in the British Isles. 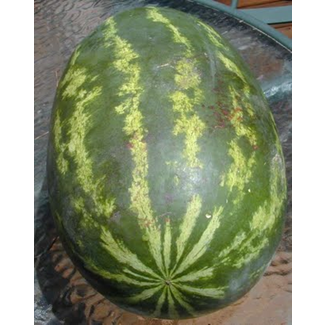 Watermelon is a vine-like flowering plant originally from southern Africa. It is a large, sprawling annual plant with coarse, hairy pinnately-lobed leaves and white to yellow flowers. It is grown for its edible fruit, also known as a watermelon, which is a special kind of berry referred to by botanists as a pepo. The fruit has a smooth hard rind, usually green with dark green stripes or yellow spots, and a juicy, sweet interior flesh, usually deep red to pink, but sometimes orange, yellow, or white, with many seeds.The plant has been cultivated in Egypt since at least the 2nd millennium BC and by the 10th century AD had reached India and China. It later spread into southern Europe and on into the New World. Much research effort has been put into breeding disease-resistant varieties and into developing a seedless strain. Nowadays a large number of cultivars are available, many of them producing mature fruit within 100 days of planting the crop. The fruit is rich in vitamins A and C and can be eaten raw or cooked in a variety of ways. 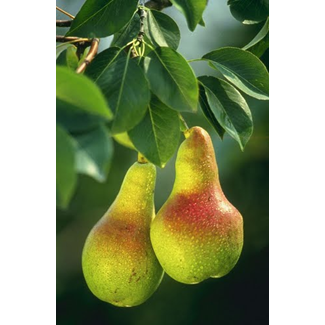 The pear is any of several tree and shrub species of genus Pyrus, in the family Rosaceae. It is also the name of the pomaceous fruit of these trees. Several species of pear are valued for their edible fruit, while others are cultivated as ornamental trees. The genus Pyrus is classified in subtribe Pyrinae within tribe Pyreae. 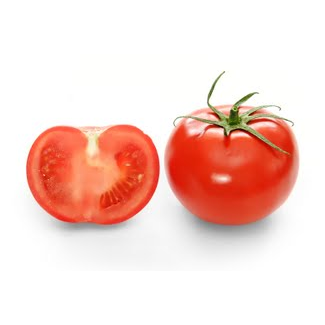 The tomato is the edible, often red fruit/berry of the nightshade Solanum lycopersicum, commonly known as a tomato plant. The species originated in the South American Andes and its use as a food originated in Mexico, and spread throughout the world following the Spanish colonization of the Americas. Its many varieties are now widely grown, sometimes in greenhouses in cooler climates.The tomato is consumed in diverse ways, including raw, as an ingredient in many dishes, sauces, salads, and drinks. While it is botanically a fruit, it is considered a vegetable for culinary purposes, which has caused some confusion. The fruit is rich in lycopene, which may have beneficial health effects.The tomato belongs to the nightshade family, Solanaceae. The plants typically grow to 1–3 meters in height and have a weak stem that often sprawls over the ground and vines over other plants. It is a perennial in its native habitat, although often grown outdoors in temperate climates as an annual. An average common tomato weighs approximately 100 grams. 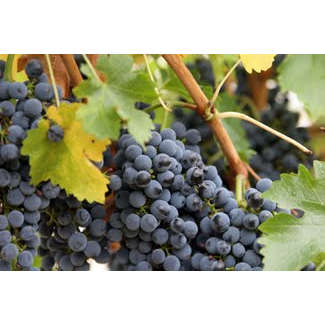 A grape is a fruiting berry of the deciduous woody vines of the botanical genus Vitis. Grapes can be eaten raw or they can be used for making wine, jam, juice, jelly, grape seed extract, raisins, vinegar, and grape seed oil. Grapes are a non-climacteric type of fruit, generally occurring in clusters. 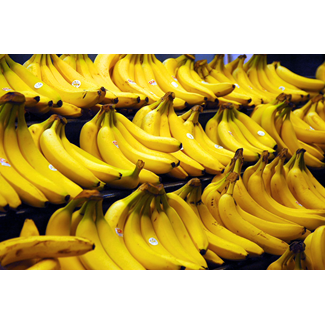 A banana is an edible fruit, botanically a berry, produced by several kinds of large herbaceous flowering plants in the genus Musa. The fruit is variable in size, color and firmness, but is usually elongated and curved, with soft flesh rich in starch covered with a rind which may be green, yellow, red, purple, or brown when ripe. The fruits grow in clusters hanging from the top of the plant. Almost all modern edible parthenocarpic bananas come from two wild species – Musa acuminata and Musa balbisiana. The scientific names of most cultivated bananas are Musa acuminata, Musa balbisiana, and Musa × paradisiaca for the hybrid Musa acuminata × M. Balbisiana, depending on their genomic constitution. The old scientific name Musa sapientum is no longer used.Musa species are native to tropical Indomalaya and Australia, and are likely to have been first domesticated in Papua New Guinea. They are grown in at least 107 countries, primarily for their fruit, and to a lesser extent to make fiber, banana wine and banana beer and as ornamental plants.Worldwide, there is no sharp distinction between "bananas" and "plantains". 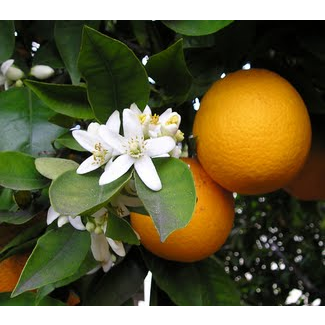 The orange is the fruit of the citrus species Citrus × sinensis in the family Rutaceae. The fruit of the Citrus sinensis is considered a sweet orange, whereas the fruit of the Citrus aurantium is considered a bitter orange. The orange is a hybrid, possibly between pomelo and mandarin, which has been cultivated since ancient times.As of 1987, orange trees were found to be the most cultivated fruit tree in the world. Orange trees are widely grown in tropical and subtropical climates for their sweet fruit. The fruit of the orange tree can be eaten fresh, or processed for its juice or fragrant peel. As of 2012, sweet oranges accounted for approximately 70% of citrus production. In 2010, 68.3 million metric tons of oranges were grown worldwide, production being particularly prevalent in Brazil and the U.S. states of Florida and California.

Mathgeekjoe says2015-05-03T12:12:38.7949955-05:00
Report Post
"To most of us, a fruit is a plant part that is eaten as a dessert or snack because it is sweet, but to a botanist a fruit is a mature ovary of a plant, and as such it may or may not taste sweet. All species of flowering plants produce fruits that contain seeds. A peach, for example, contains a pit that can grow into a new peach tree, while the seeds known as peas can grow into another pea vine. To a botanist, apples, peaches, peppers, tomatoes, pea pods, cucumbers, and winged maple seeds are all fruits. A vegetable is simply part of a plant that is grown primarily for food. Thus, the leaf of spinach, the root of a carrot, the flower of broccoli, and the stalk of celery are all vegetables. In everyday, nonscientific speech we make the distinction between sweet plant parts (fruits) and nonsweet plant parts (vegetables). This is why we speak of peppers and cucumbers and squash—all fruits in the eyes of a botanist—as vegetables." http://dictionary.reference.com/browse/fruit