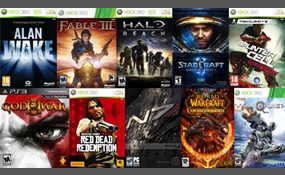 Dark Souls is an action role-playing video game set in an open world environment. It was developed and published for PlayStation 3 and Xbox 360 by From Software in Japan and by Namco Bandai Games internationally. A spiritual successor to From Softwa... re's Demon's Souls, Dark Souls began development under the working title Project Dark. The game was released in 2011, in Japan on September 22, in North America on October 4, in Australia on October 6, and in Europe on October 7. On August 24, 2012, the "Prepare to Die" edition of Dark Souls was released for PC, featuring additional content previously unavailable to PlayStation 3 and Xbox 360 users. On October 23, 2012, the additional content from the PC version was released as downloadable content for consoles under the title Artorias of the Abyss.Dark Souls takes place in the fictional kingdom of Lordran. Players assume the role of a cursed human character who has been chosen to make a pilgrimage out of the Undead Asylum to discover the fate of the undead. The plot of Dark Souls is primarily told through descriptions of in-game items and dialogue with non-playable characters   more
2 votes
0 comments
Dark Souls - Voter Comments
No Comments
Vote & Comment
2

Dark Souls II is an action RPG video game. The third game in its series, Dark Souls II was developed for Microsoft Windows, PlayStation 3 and Xbox 360 by From Software, which also published the game in Japan, while Bandai Namco Games published the g... ame in other regions.Dark Souls II was announced at the Spike Video Game Awards on December 7, 2012. Hidetaka Miyazaki, who served as director on the two earlier games in the series, Demon's Souls and Dark Souls, acted as a supervisor, while the game was directed by Tomohiro Shibuya and Yui Tanimura. Although set in the same world, there is no direct story connection between Dark Souls and Dark Souls II. The game uses dedicated multiplayer servers.Taking place in the world of Drangleic, the game features both player versus environment and player versus player play, in addition to having some co-op components. As in the earlier games in the series, it once again features challenging gameplay, but with a more powerful graphics engine and more advanced AI system.After some initial delays, the game had its official launch in North America on March 11, 2014, with the PC release launching on April 24, 2014   more
2 votes
0 comments
Dark Souls II - Voter Comments
No Comments
Vote & Comment
3

Basically anything and everything by FromSoftware

0 votes
0 comments
Basically anything and everything by FromSoftware - Voter Comments
No Comments
Vote & Comment
Leave a comment...
(Maximum 900 words)