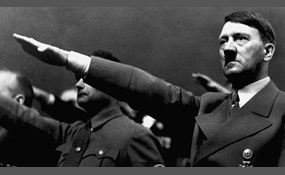 Erwin Johannes Eugen Rommel, popularly known as the Desert Fox, was a German field marshal of World War II. He earned the respect of both his own troops and his enemies.Rommel was a highly decorated officer in World War I and was awarded the Pour le...  Mérite for his exploits on the Italian Front. In World War II, he further distinguished himself as the commander of the 7th Panzer Division during the 1940 invasion of France. His leadership of German and Italian forces in the North African campaign established him as one of the most able commanders of the war, and earned him the appellation of the Desert Fox. He is regarded as one of the most skilled commanders of desert warfare in the conflict. He later commanded the German forces opposing the Allied cross-channel invasion of Normandy. His assignments never took him to the Eastern Front.Rommel is regarded as having been a humane and professional officer. His Afrika Korps was never accused of war crimes, and soldiers captured during his Africa campaign were reported to have been treated humanely. Orders to kill Jewish soldiers, civilians and captured commandos were ignored   more
9 votes
3 comments
Erwin Rommel - Voter Comments

Erich von Manstein was one of the most prominent commanders of the Wehrmacht, Nazi Germany's armed forces during World War II. Attaining the rank of field marshal, he was held in high esteem by both the Axis powers and the Allies as one of Germany's...  best military strategists and field commanders.Born into an aristocratic Prussian family with a long history of military service, Manstein joined the army at a young age and saw service on several fronts during World War I. He rose to the rank of captain by the end of the war and was active in the inter-war period helping Germany rebuild her armed forces. During the invasion of Poland at the outbreak of World War II, he was serving as Chief of Staff to Gerd von Rundstedt's Army Group South. Hitler chose Manstein's strategy for the invasion of France, a plan later refined by Franz Halder and other members of the OKH   more
1 vote
0 comments
Erich von Manstein - Voter Comments
No Comments
Vote & Comment
3

Heinz Wilhelm Guderian was a German general of partial Armenian descent during World War II. He was a pioneer in the development of armoured warfare, and was the leading proponent of tanks and mechanization in the Wehrmacht. Germany's panzer forces ... were raised and organized under his direction as Chief of Mobile Forces. During the war, he was a highly successful commander of panzer forces in several campaigns. He had major conflicts with Adolf Hitler over Hitler's interference in the management of the campaigns. This culminated in the German defeat before Moscow. He was placed in reserve until significant losses in the panzerwaffe made it imperative that he be brought back to rebuild it. A special position was created for him, and in February 1943 he became Inspector General of Armoured Troops. His efforts at rebuilding met with considerable resistance from Hitler himself. He was ultimately promoted to the highest rank in the army, Chief of the Oberkommando des Heeres, or Chief of the General Staff of the Army. By this point, however, Hitler had undermined the authority of the position, and Guderian was compelled to play the part of a figurehead for the last year of the war   more
0 votes
0 comments
Heinz Guderian - Voter Comments
No Comments
Vote & Comment
7

Moritz Albrecht Franz Friedrich Fedor von Bock was a German field marshal who served in the German army during the Second World War. As a leader who lectured his soldiers about the honor of dying for the German Fatherland, he was nicknamed "Der Ster... ber". Bock served as the commander of Army Group North during the Invasion of Poland in 1939, commander of Army Group B during the Invasion of France in 1940, and later as the commander of Army Group Center during the attack on the Soviet Union in 1941; his final command was that of Army Group South in 1942.Bock is best known for commanding Operation Typhoon, the ultimately failed attempt to capture Moscow during the winter of 1941. The Wehrmacht offensive was slowed by stiff Soviet resistance around Mozhaisk, and also by the Rasputitsa, the season of rain and mud in Russia. Once the full fury of the Russian winter struck, which was the coldest in over 50 years, the German armies quickly became unable to fight, with more casualties occurring due to the cold weather than battle   more
0 votes
0 comments
Fedor von Bock - Voter Comments
No Comments
Vote & Comment
8

Otto Moritz Walter Model was a German general and later field marshal during World War II. He is noted for his defensive battles in the latter half of the war, mostly on the Eastern Front but also in the west. He has been called the Third Reich's be... st defensive tactical commander.Although he was a hard-driving, aggressive panzer commander early in the war, Model became best known as a practitioner of defensive warfare. His success at the head of the 9th army in the defensive battles of 1941–1942 determined his future career path.Model first came to Hitler's attention before World War II, but their relationship did not become especially close until 1942. His tenacious style of fighting and aggressive personality won him plaudits from Hitler, who considered him one of his best field commanders and repeatedly tasked him with retrieving desperate situations. However, their relationship had broken down by the end of the war after Model was defeated at the Battle of the Bulge   more
0 votes
0 comments
Walter Model - Voter Comments
No Comments
Vote & Comment
Leave a comment...
(Maximum 900 words)

STALIN says2014-08-01T10:26:28.3177801-05:00
Report Post
@UltimateBohab: STFU. @Diqiucun_Cunmin: That's fine. @Bennett91: While I agree, Erwin Rommel was a good general and amongst the best German generals, we must remember that Erich Von Manstein also fought against superior numbers on the eastern front and Heinz Guderian developed the role of tanks in the Blitzkrieg strategy.
Privacy Policy | Terms of Use
Sitemap | View Desktop Version
©2020 Debate.org. All rights reserved.