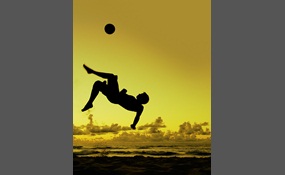 I know that I don't have all the best goals, if I am missing some amazing goals please add them to the list. I purposely didn't pick many because there just are so many and I want everyone to contribute an amazing goal. Pick your favorite goal ever in FIFA.

James David Rodríguez Rubio; born 12 July 1991, usually known as James Rodríguez or simply James, is a Colombian footballer who plays for Spanish club Real Madrid and the Colombian national team, as an attacking midfielder or winger.Rodríguez is com... monly ranked as one of the best young players in the world. He has received praise for his technique, vision and playmaking skills, and has been referred to as the successor to his compatriot Carlos Valderrama.Rodríguez became well known in Europe during his time at Porto, winning several trophies and individual awards during his 3 years at the club. In 2014, Rodríguez moved from Monaco to Real Madrid for a transfer fee of €80 million, making him the most expensive Colombian in history, above Radamel Falcao, and one of the most expensive players in football.His emergence in the Colombia national football team started with the U-20 national team, where he was captain of the 2011 Toulon Tournament-winning side. He eventually captained the U-20 team during the 2011 FIFA U-20 World Cup, which eventually led him to become a regular on the senior squad by age 20   more
2 votes
0 comments
James Rodríguez (Colombia) vs Uruguay - Voter Comments
No Comments
Vote & Comment
2

Zlatan Ibrahimović is a Swedish professional footballer who plays as a striker for French club Paris Saint-Germain and the Swedish national team for which he is captain.Ibrahimović started his career at Malmö FF in the late 1990s before being signed...  by Ajax, where made a name for himself under Ronald Koeman. He later signed with Juventus for €16 million, and gained fame in Serie A by benefiting from his strike partnership with David Trezeguet. In 2006, Ibrahimović signed with rivals Internazionale, where he won individual awards such as the Italian Oscar del Calcio and the Swedish Guldbollen, and was named in the 2007 and 2009 UEFA Team of the Year, in addition to finishing as the league's highest scorer in 2008–09 while winning three straight Scudetti. In the summer of 2009, he transferred to Barcelona. His time at Barcelona was short-lived, however, moving back to Serie A football with A.C. Milan the following season, in a deal which made him one of the highest paid footballers in the world and cost the Italian club €24 million. He signed with Paris Saint-Germain in July 2012   more
2 votes
1 comment
Zlatan Ibrahimović (Sweden) vs England - Voter Comments

Rivaldo Vítor Borba Ferreira, known as Rivaldo, is a former Brazilian professional footballer and the current president of Mogi Mirim Esporte Clube in Brazil. He played mainly as a free playmaking attacking midfielder and sometimes as a second strik... er. Although primarily left footed, he was capable of playing on either flank, and was on occasion deployed as a wide midfielder or as a winger, also due to his pace, technique, vision, and crossing ability.He spent five years with Spanish club Barcelona, where he formed a successful partnership with Patrick Kluivert, and won the 1998 and 1999 Spanish La Liga championship and the 1998 Copa del Rey.From 1993 and 2003, Rivaldo played 74 matches and scored 35 goals for Brazil and is the seventh highest goalscorer. He helped Brazil reach the final of the 1998 FIFA World Cup, and won the 1999 Copa América where he was named player of the tournament. Rivaldo starred alongside Ronaldo and Ronaldinho in the 2002 FIFA World Cup winning team. He was named in the FIFA World Cup All-Star Team in 1998 and 2002   more
1 vote
0 comments
Rivaldo (Barcelona) vs Valencia - Voter Comments
No Comments
Vote & Comment
4

Carli Anne Lloyd is an American professional soccer midfielder who currently plays for Houston Dash in the National Women's Soccer League and the United States women's national soccer team. She is a two-time Olympic gold medalist and scored the gold...  medal-winning goals in the finals of both the 2008 Summer Olympics and the 2012 Summer Olympics. She has represented the United States at two FIFA Women's World Cup tournaments: first at the 2007 FIFA Women's World Cup in which she helped the U.S. win bronze and at the 2011 FIFA Women's World Cup in which the U.S. won silver. She has played in over 180 matches for the U.S. national team and scored over 50 goals.Llloyd played professionally for the Chicago Red Stars, Sky Blue FC, and Atlanta Beat in Women's Professional Soccer. She was allocated to the Western New York Flash for the inaugural season of the National Women's Soccer League in 2013 helping the team win the regular season championship   more
1 vote
0 comments
Carli Lloyd's midfield goal in Fifa womens world cup - Voter Comments
No Comments
Vote & Comment
5

It meant Fifa was over and people could stop talking about it. THANK YOU FINAL GOAL!
1 vote
0 comments
The last one - Voter Comments
No Comments
Vote & Comment
6

Arjen Robben is a Dutch professional footballer who plays for German Bundesliga club Bayern Munich and the Netherlands national team. Robben has appeared at the 2004, 2008 and 2012 UEFA European Championships, and the 2006, 2010 and 2014 FIFA World ... Cups. He is a forward who usually plays as a left or right sided winger. Robben is known for his dribbling skills, speed, crossing ability and his accurate left foot long-range shots from the right wing.Robben first came to prominence with Groningen, for whom he was player of the year for the 2000–01 Eredivisie season. Two years later he signed for PSV, where he became the Netherlands' Young Player of the Year and won an Eredivisie title. The following season Robben's signature was pursued by leading English clubs, and after protracted transfer negotiations he joined Chelsea in 2004.Robben's Chelsea debut was delayed through injury, but upon returning to fitness he helped Chelsea bring home two consecutive Premier League titles, and was the FA Premier League Player of the Month in November 2005. After a third season in England which was punctuated by injury, Robben moved to Spanish club Real Madrid for €35 million   more
0 votes
0 comments
Arjen Robben diving header goal vs Spain - Voter Comments
No Comments
Vote & Comment
Leave a comment...
(Maximum 900 words)