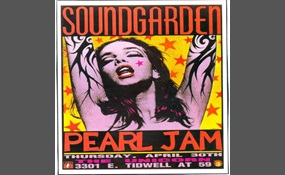 WHo was the best band at the time, not talking about Alice and Chains, Soundgarden's new music.

Alice in Chains is an American rock band formed in Seattle, Washington, in 1987 by guitarist and songwriter Jerry Cantrell and original lead vocalist Layne Staley. The initial lineup was rounded out by drummer Sean Kinney, and bassist Mike Starr.Alt... hough widely associated with grunge music, the band's sound incorporates heavy metal and acoustic elements. Since its formation, Alice in Chains has released five studio albums, three EPs, two live albums, four compilations, and two DVDs. The band is known for its distinct vocal style which often included the harmonized vocals of Staley and Cantrell.Alice in Chains rose to international fame as part of the grunge movement of the early 1990s, along with other Seattle bands such as Nirvana, Pearl Jam, and Soundgarden. The band was one of the most successful music acts of the 1990s, selling over 20 million albums worldwide, and over 14 million in the US alone. In 1992, the band released their album Dirt, which was critically acclaimed and has been certified quadruple platinum. The band also achieved two No. 1 Billboard 200 releases, 14 top ten songs on the Mainstream Rock Tracks chart and eight Grammy Award nominations   more
4 votes
0 comments
Alice in Chains - Voter Comments
No Comments
Vote & Comment
2

Nirvana was an American rock band formed by singer/guitarist Kurt Cobain and bassist Krist Novoselic in Aberdeen, Washington in 1987. Nirvana went through a succession of drummers, the longest-lasting being Dave Grohl, who joined the band in 1990. D... espite releasing only three full-length studio albums in their seven-year career, Nirvana has come to be regarded as one of the most influential and important rock bands of the modern era.In the late 1980s Nirvana established itself as part of the Seattle grunge scene, releasing its first album Bleach for the independent record label Sub Pop in 1989. The band eventually came to develop a sound that relied on dynamic contrasts, often between quiet verses and loud, heavy choruses. After signing to major label DGC Records, Nirvana found unexpected success with "Smells Like Teen Spirit", the first single from the band's second album Nevermind. Nirvana's sudden success widely popularized alternative rock as a whole, and the band's frontman Cobain found himself referred to in the media as the "spokesman of a generation", with Nirvana being considered the "flagship band" of Generation X. Nirvana's third and final studio album, In Utero, featured an abrasive, less-mainstream sound and challenged the group's audience. The album did not match the sales figures of Nevermind but was still a critical and commercial success. Nirvana's brief run ended following the death of Kurt Cobain in 1994, but various posthumous releases have been issued since, overseen by Novoselic, Grohl, and Cobain's widow Courtney Love   more
3 votes
2 comments
Nirvana - Voter Comments

iamanatheistandthisiswhy says2014-05-17T22:17:31.2368776-05:00
Report Post
Personally all the band on this list are great. I just love the unfinished gritty sound that Nirvana had. It just never sounded finished.

Soundgarden is an American rock band formed in Seattle, Washington, in 1984 by singer and rhythm guitarist Chris Cornell, lead guitarist Kim Thayil, and bassist Hiro Yamamoto. Matt Cameron became the band's full-time drummer in 1986, while bassist B... en Shepherd became a permanent replacement for Yamamoto in 1990.Soundgarden was one of the seminal bands in the creation of grunge, a style of alternative rock that developed in Seattle, and was one of a number of grunge bands signed to the record label Sub Pop. Soundgarden was the first grunge band to sign to a major label, though the band did not achieve commercial success until they popularized the genre in the early 1990s with Seattle contemporaries Pearl Jam, Nirvana, and Alice in Chains.Soundgarden achieved its biggest success with the 1994 album Superunknown, which debuted at number one on the Billboard charts and yielded the Grammy Award-winning singles "Black Hole Sun" and "Spoonman". In 1997, the band broke up due to internal strife over its creative direction. After several years working on projects and other bands, Soundgarden reunited in 2010 and their sixth studio album, King Animal, was released two years later   more
1 vote
1 comment
Soundgarden - Voter Comments

Pearl Jam is an American rock band that formed in Seattle, Washington, in 1990. Since its inception, the band's line-up has included Stone Gossard, Jeff Ament, Mike McCready, and Eddie Vedder. The band's fifth and current drummer is Matt Cameron, of...  Soundgarden, who has been with the band since 1998.Formed after the demise of Gossard and Ament's previous band, Mother Love Bone, Pearl Jam broke into the mainstream with its debut album, Ten, in 1991. One of the key bands of the grunge movement in the early 1990s, over the course of the band's career, its members became noted for their refusal to adhere to traditional music industry practices, including refusing to make music videos, giving interviews and engaging in a much-publicized boycott of Ticketmaster. In 2006, Rolling Stone described the band as having "spent much of the past decade deliberately tearing apart their own fame."To date, the band has sold more than 31.5 million records in the U.S, and an estimated 60 million worldwide. Pearl Jam has outlasted and outsold many of its contemporaries from the alternative rock breakthrough of the early 1990s, and is considered one of the most influential bands of the decade. Stephen Thomas Erlewine of Allmusic referred to Pearl Jam as "the most popular American rock & roll band of the '90s.   more
0 votes
0 comments
Pearl Jam - Voter Comments
No Comments
Vote & Comment
5

Hole was an American alternative rock band that formed in Los Angeles, California in 1989 by vocalist, lyricist, and rhythm guitarist Courtney Love, and lead guitarist Eric Erlandson. The band had a revolving line-up of bassists and drummers, their ... most prolific being drummer Patty Schemel, and bassists Kristen Pfaff and Melissa Auf der Maur.Initially part of Los Angeles' indie rock scene, the band released singles on Sympathy for the Record Industry and Sub Pop before collaborating with Kim Gordon for their debut album, Pretty on the Inside. After signing with Geffen Records in 1993, the band released the critically and commercially successful Live Through This, and Celebrity Skin, the latter of which garnered them four Grammy nominations. The group officially disbanded in 2002 and its members pursued other projects. In 2009, Hole was reformed by Love with new members, despite Erlandson's claim that the reformation breached a mutual contract he had with Love. The reformed band released the album Nobody's Daughter, but Love announced in 2012 that she was returning to a solo career, and declared that "Hole is dead". However, on December 29, 2013, NME and Time magazine published articles concerning photographs Love posted of herself with Eric Erlandson on Facebook, with captions alluding that the two had reconciled. In April 2014, Love confirmed in an interview with BBC that she was writing new material and that a reunion was being planned, which would include herself, Erlandson, Auf der Maur, and Schemel. Though Love retracted the statement, she said in an interview with Pitchfork on May 1 that a reunion was likely happening, and that it would be occurring in 2015   more
0 votes
0 comments
Hole - Voter Comments
No Comments
Vote & Comment
6

Stone Temple Pilots, currently known as Stone Temple Pilots with Chester Bennington, is an American rock band from San Diego, California, that currently consists of brothers Robert and Dean DeLeo, Eric Kretz, and Chester Bennington. Since its format... ion, STP's line-up had remained unchanged until the dismissal of lead vocalist Scott Weiland in 2013 and the subsequent addition of Bennington of Linkin Park as his replacement vocalist.After forming in 1985 under the name Mighty Joe Young, the band signed with Atlantic Records and changed its name to Stone Temple Pilots. STP found immediate success in 1993 upon releasing their debut album Core, and went on to become one of the most commercially successful bands of the 1990s. The band released four more studio albums: Purple, Tiny Music... Songs from the Vatican Gift Shop, No. 4 and Shangri-La Dee Da before separating in 2003, after which the band members partook in various projects, most notably Velvet Revolver and Army of Anyone. STP eventually reconvened in 2008 for a reunion tour, released a new self-titled album in 2010, and have been actively touring since, although Weiland was fired from the band and was replaced by Bennington in 2013. The band's first material with Bennington, the EP High Rise, was released October 8   more
0 votes
0 comments
Stone Temple Pilots - Voter Comments
No Comments
Vote & Comment
7

Screaming Trees was an American rock band formed in Ellensburg, Washington in 1985 by vocalist Mark Lanegan, guitarist Gary Lee Conner, bass player Van Conner and drummer Mark Pickerel. Pickerel had been replaced by Barrett Martin by the time the ba... nd reached its most successful period. Although widely associated with grunge, the band's sound incorporated hard rock and psychedelic elements. Since its formation, Screaming Trees released seven studio albums, five EPs and three compilations.Screaming Trees is known as one of the "Godfathers of Grunge" along with the Melvins, Mudhoney, U-Men, Skin Yard, Soundgarden, Green River, Cosmic Psychos and Malfunkshun. Screaming Trees rose to fame as part of the grunge movement of the early 1990s, along with bands such as Alice in Chains, Stone Temple Pilots, Pearl Jam, Nirvana and Soundgarden and was one of the most successful underground music acts of the 1990s. The band achieved one top ten single on the Modern Rock Tracks charts. Screaming Trees were plagued by extended inactivity due to their problems with making a follow up to Dust. This led to their official breakup in 2000   more
0 votes
0 comments
Screaming Trees - Voter Comments
No Comments
Vote & Comment
8

Mudhoney is an American grunge band. Formed in Seattle, Washington, in 1988 following the demise of Green River, Mudhoney's members are vocalist and rhythm guitarist Mark Arm, lead guitarist Steve Turner, bassist Guy Maddison, and drummer Dan Peters... . Original bassist Matt Lukin left the band in 1999 but briefly returned in December 2000 to complete touring obligations.Mudhoney's early releases on Sub Pop, particularly their debut single "Touch Me I'm Sick" and the Superfuzz Bigmuff EP, were massively influential on the Seattle music scene, helping more than almost any other releases of the era to inspire the dirty, high-distortion sound that would become grunge. Later on, Mudhoney also mixed heavy blues rock and punk rock into their sound at various stages. Although the band has found little commercial success during its long career, which has yielded 10 studio albums, it has inspired countless grunge and alternative rock musicians   more
0 votes
0 comments
Mudhoney - Voter Comments
No Comments
Vote & Comment
9

Mother Love Bone was an American rock band that formed in Seattle, Washington in 1988. The band was active from 1988 to 1990. Frontman Andrew Wood's personality and compositions helped to catapult the group to the top of the burgeoning late 1980s/ea... rly 1990s Seattle music scene. Wood died only days before the scheduled release of the band's debut album, Apple, thus ending the group's hopes of success. The album was finally released a few months later   more
0 votes
0 comments
Mother Love Bone - Voter Comments
No Comments
Vote & Comment
Leave a comment...
(Maximum 900 words)