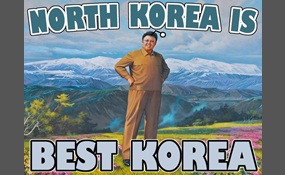 Who is the best North Korean leader so far.

Dennis Keith Rodman is a retired American professional basketball player, who played for the Detroit Pistons, San Antonio Spurs, Chicago Bulls, Los Angeles Lakers, and Dallas Mavericks in the National Basketball Association. Born in Trenton, New Jer... sey, he was nicknamed "The Worm" and was known for his fierce defensive and rebounding abilities.Rodman played at the small forward position in his early years before becoming a power forward. He earned NBA All-Defensive First Team honors seven times and won the NBA Defensive Player of the Year Award twice. He also led the NBA in rebounds per game for a record seven consecutive years and won five NBA championships. His biography at NBA.Com states that he is "arguably the best rebounding forward in NBA history." On April 1, 2011, the Pistons retired Rodman's No. 10 jersey, and he was inducted into the Naismith Memorial Basketball Hall of Fame later that year.Rodman experienced an unhappy childhood and was shy and introverted in his early years. After aborting a suicide attempt in 1993, he reinvented himself as a "bad boy" and became notorious for numerous controversial antics. He repeatedly dyed his hair in artificial colors, had many piercings and tattoos, and regularly disrupted games by clashing with opposing players and officials. He famously wore a wedding dress to promote his 1996 autobiography Bad As I Wanna Be. Rodman pursued a high-profile affair with singer Madonna and was briefly married to actress Carmen Electra   more
4 votes
1 comment
Dennis Rodman (akak No Leader) - Voter Comments

Kim Il-sung was the leader of the Democratic People's Republic of Korea, commonly referred to as North Korea, from its establishment in 1948 until his death in 1994. He held the posts of Prime Minister from 1948 to 1972 and President from 1972 to hi... s death. He was also the leader of the Workers' Party of Korea from 1949 to 1994. He authorized the invasion of South Korea in 1950, triggering a police action by the United Nations led by the United States. A cease-fire in the Korean War was signed on 27 July 1953.His tenure as leader of North Korea was autocratic, and he established an all-pervasive cult of personality. From the mid-1960s, he promoted his self-developed Juche variant of socialist organisation, which later replaced Marxism-Leninism as the ideology of the state.His son Kim Jong-il became his formal successor at the 6th WPK Congress, and succeeded him in 1994. The North Korean government refers to Kim Il-sung as "The Great Leader" and he is designated in the North Korean constitution as the country's "Eternal President". His birthday is a public holiday in North Korea and is called the "Day of the Sun"   more
2 votes
1 comment
Kim Il-sung (akak Great Leader) - Voter Comments

Tyranus says2014-06-03T21:15:41.8115398-05:00
Report Post
Probably Korea's only competent leader. Though he did not win the Civil War, he was the Lenin or Mao of North Korea, establishing his nation. Though North Korea today is a joke, it takes skill to establish a nation and get things running smoothly. You don't become the Great Leader for your looks, you have to do something. If any North Korean Leader was to be considered the Best, Kim il-Sung is the best without a doubt
Vote & Comment
3

Kim Jong-il was the Supreme Leader of the Democratic People's Republic of Korea, commonly referred to as North Korea, from 1994 to 2011. He succeeded his father and founder of the DPRK, Kim Il-sung, following the elder Kim's death in 1994. Kim Jong-... il was the General Secretary of the Workers' Party of Korea, Chairman of the National Defence Commission of North Korea, and the Supreme Commander of the Korean People's Army, the fourth-largest standing army in the world.In April 2009, North Korea's constitution was amended to refer to him as the "supreme leader". The North Korean government announced his death on 19 December 2011, whereupon his third son, Kim Jong-un, was promoted to a senior position in the ruling Workers' Party and succeeded him   more
2 votes
1 comment
Kim Jong-il (aka Supreme Leader) - Voter Comments

Kim Jong-un (To be determined leader)