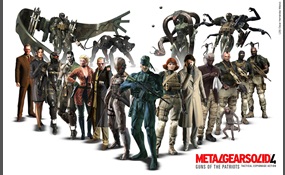 Metal Gear has had some interesting characters through the years. Which one do you think is best?

Solid Snake is a fictional character and one of the main protagonists of Konami's Metal Gear series created by Hideo Kojima. The Metal Gear Solid games has Japanese voice actor Akio Ōtsuka providing the character's Japanese voice while actor and scr... eenwriter David Hayter provides the character's English voice.Solid Snake's character is a combination of a spy, mercenary and spec ops agent. A member of FOXHOUND, he is tasked with disarming and destroying the bipedal nuclear weapon-armed mecha Metal Gear. Controlled by the player, he must act alone, supported via radio by commanding officers and specialists. While his first appearances in the original Metal Gear games were references to Hollywood films, the Metal Gear Solid series has given a consistent design by artist Yoji Shinkawa alongside an established personality.Solid Snake's character has been well received by critics. He appeared in several lists of best characters in gaming history   more
7 votes
0 comments
Solid Snake - Voter Comments
No Comments
Vote & Comment
2

Revolver Ocelot is a fictional character and recurring antagonist in Konami's Metal Gear series. Ocelot is acquaintances with several characters: a henchman of Liquid Snake, the right-hand man of Solidus Snake, the son of The Boss, a friendly rival ... of Big Boss, and a nemesis to Solid Snake.The character has been well received by video game publications for his role as a central villain in the franchise and has often been considered one of its most important characters for his connections with the protagonists   more
1 vote
0 comments
Ocelot - Voter Comments
No Comments
Vote & Comment
4

Dr Hal Emmerich, nicknamed Otacon, is a fictional character from Konami's Metal Gear series. Created by Hideo Kojima and designed by Yoji Shinkawa, Otacon was introduced in the series in Metal Gear Solid.In Metal Gear Solid, Otacon, an ArmsTech empl... oyee who designed Metal Gear REX, becomes a close ally of Solid Snake upon learning of REX's nuclear strike capabilities. After the events of Metal Gear Solid, he helped Solid Snake form Philanthropy, a group whose main objective is to prevent proliferation of Metal Gear-type weapons. Snake and Otacon infiltrate the military installations and facilities of the world, delving into their compounds through stealth and cyber hacking. In a sense, Snake is the brawn and Otacon is the brains behind "Philanthropy."A devoted fan of anime, Hal's chosen nickname is the short form of the Otaku Convention, with reference to Otakon held in Baltimore each year. The name "Hal" is a direct reference to the computer HAL 9000 from the film 2001: A Space Odyssey, one of several references to the film which is present in Metal Gear Solid; in the Otacon ending of the game, Hal and Snake make direct comparisons to the film   more
1 vote
1 comment
Otacon - Voter Comments

Vamp was an ex-member of Dead Cell with vampire-like attributes, including a taste for blood, the ability to run across or stand on the surface of water or vertical walls, superhuman speed and agility, and the ability to shrug off what would typical... ly be a mortal wound (e.G. Being shot in the head). Besides his seemingly vampiric abilities, he was also an expert with knives and close-quarters combat   more
1 vote
0 comments
Vamp - Voter Comments
No Comments
Vote & Comment
6

Big Boss is the central character of Konami's Metal Gear series of video games. He was introduced in the first game in the original Metal Gear series as the commanding officer and then nemesis of the player character, Solid Snake. He later becomes t... he protagonist of Metal Gear Solid prequels where he is depicted as an American covert operative, decorated war hero and later as the leader of a rogue band of mercenaries, leading into the events of Metal Gear.Big Boss's character has been praised by video game publications for his role as a villain as well for his relationship with Solid Snake. As the series' chronology progressed, his exact alleigence and motivations became increasingly complex; in his first appearances, he is depicted as a traitor dreaming of a world of perpetual war, but subsequent appearances have revealed him to be a key figure in an ideological dispute that shaped the latter half of the twentieth century, and a man whose conscience was disturbed by the attitude of leaders towards soldiers, prompting his decision to become a soldier of fortune   more
1 vote
0 comments
Punished Snake - Voter Comments
No Comments
Vote & Comment
7

The Boss, also known as The Joy, The Mother of Special Forces and Voyevoda (Russian for "Warlord"), was the "final child of the Philosophers," and the mentor of Naked Snake. She was the founding leader of the Cobra Unit, in which she was known as "T... he Joy," however, when they were disbanded at the end of World War II, she was granted the codename of "The Boss." Together with Naked Snake, she developed the technique of CQC   more
0 votes
0 comments
The Boss - Voter Comments
No Comments
Vote & Comment
9

The End was the legendary "Ancient Sniper" of the Cobra Unit. He was over 100 years old when he was defeated by Naked Snake in 1964.
0 votes
0 comments
The End - Voter Comments
No Comments
Vote & Comment
10

Psycho Mantis was a psychic member of FOXHOUND, who participated in the armed takeover of Shadow Moses Island in 2005. He wore a gas mask to help prevent people's thoughts from "forcing their way into his mind.
0 votes
0 comments
Psycho Mantis - Voter Comments
No Comments
Vote & Comment
13

Solidus Snake, real name George Sears, and commonly referred to as Solidus, was the 43rd President of the United States, and a product of the Les Enfants Terribles project, making him the third "Son of Big Boss." After secretly instigating the event... s on Shadow Moses Island, he became directly involved in the Big Shell Incident   more
0 votes
0 comments
Solidus Snake - Voter Comments
No Comments
Vote & Comment
No comments yet.
Leave a comment...
(Maximum 900 words)
Privacy Policy | Terms of Use
Sitemap | View Desktop Version
©2021 Debate.org. All rights reserved.