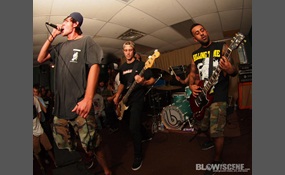 If you do know any of these albums then sorry haha. Predicting a low turnout anyways.

Songs to Scream at the Sun

Letters Home is the third studio album by the American melodic hardcore band Defeater. Like their previous releases, Letters Home is a concept album, following the story of the father of the characters of their other albums, prior to the events of T... ravels   more
0 votes
0 comments
Letters Home - Voter Comments
No Comments
Vote & Comment
4

The Difference Between Hell and Home

The Difference Between Hell and Home is the third studio album by Canadian melodic hardcore/metalcore band Counterparts. It was released on July 24, 2013 through Victory Records. The album received positive critical reception, generating an aggregat... ed score of 79/100 on Metacritic, indicating "Generally favorable reviews". This album also marks the first appearance by drummer Kelly Bilan as well as the last appearance by bass guitarist Eric Bazinet   more
0 votes
0 comments
The Difference Between Hell and Home - Voter Comments
No Comments
Vote & Comment
5