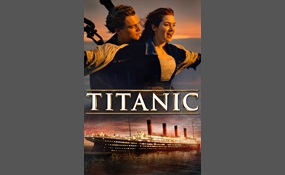 Titanic is a 1997 American epic romantic disaster film directed, written, co-produced, co-edited and partly financed by James Cameron. A fictionalized account of the sinking of the RMS Titanic, it stars Leonardo DiCaprio and Kate Winslet as members ... of different social classes who fall in love aboard the ship during its ill-fated maiden voyage.Cameron's inspiration for the film was predicated on his fascination with shipwrecks; he wanted to convey the emotional message of the tragedy and felt that a love story interspersed with the human loss would be essential to achieving this. Production on the film began in 1995, when Cameron shot footage of the actual Titanic wreck. The modern scenes were shot on board the Akademik Mstislav Keldysh, which Cameron had used as a base when filming the wreck. A reconstruction of the Titanic built at Playas de Rosarito in Baja California, scale models, and computer-generated imagery were used to recreate the sinking. The film was partially funded by Paramount Pictures and 20th Century Fox, and, at the time, was the most expensive film ever made, with an estimated budget of $200 million.Upon its release on December 19, 1997, the film achieved critical and commercial success. Nominated for fourteen Academy Awards, it won eleven, including the awards for Best Picture and Best Director, tying Ben Hur for most Oscars won by a single film. With an initial worldwide gross of over $1.84 billion, it was the first film to reach the billion-dollar mark. It remained the highest-grossing film of all time, until Cameron's 2009 film Avatar surpassed its gross in 2010. A 3D version of the film, released on April 4, 2012 to commemorate the centenary of the sinking of the ship, earned it an additional $343.6 million worldwide, pushing Titanic's worldwide total to $2.18 billion. It became the second film to gross more than $2 billion worldwide   more
18 votes
1 comment
Titanic - Voter Comments

The Harry Potter film series is a British–American feature film series based on the Harry Potter novels by author J. K. Rowling. The series is distributed by Warner Bros. And consists of eight fantasy films beginning with Harry Potter and the Philos... opher's Stone and culminating with Harry Potter and the Deathly Hallows – Part 2. It is the highest-grossing film series in inflation unadjusted dollars, with $7.7 billion in worldwide receipts. Each film is individually among the 50 highest-grossing films in inflation unadjusted dollars and was a critical success.The series was produced by David Heyman and stars Daniel Radcliffe, Rupert Grint and Emma Watson as the three leading characters, Harry Potter, Ron Weasley and Hermione Granger. Four directors worked on the series: Chris Columbus, Alfonso Cuarón, Mike Newell, and David Yates. Production took over ten years to complete, with the main story arc following Harry Potter's quest to overcome his arch-enemy Lord Voldemort.Harry Potter and the Deathly Hallows, the seventh and final novel in the series, was adapted into two feature-length parts. Part 1 was released in November 2010, and Part 2 was released in July 2011   more
6 votes
0 comments
Harry Potter film series - Voter Comments
No Comments
Vote & Comment
3

The Twilight Saga is a series of five romance fantasy films from Summit Entertainment based on the four novels by the American author Stephenie Meyer. The films star Kristen Stewart, Robert Pattinson, and Taylor Lautner. The series has grossed over ... $3.3 billion in worldwide receipts and consists, to date, of five motion pictures. The first installment, Twilight, was released on November 21, 2008. The second installment, New Moon, followed on November 20, 2009, breaking box office records as the biggest midnight screening and opening day in history, grossing an estimated $72.7 million. The third installment, Eclipse, was released on June 30, 2010, and was the first Twilight film to be released in IMAX.The series was in development since 2004 at Paramount Pictures, during which time a screen adaptation of Twilight that differed significantly from the novel was written. Three years later, Summit Entertainment acquired the rights to the film. After Twilight grossed $35.7 million on its opening day, Summit Entertainment announced they would begin production on New Moon; they had acquired the rights to the remaining novels earlier that same month. A two-part adaptation of Breaking Dawn began shooting in November 2010 with November 18, 2011, and November 16, 2012, release dates   more
3 votes
0 comments
The Twilight Saga - Voter Comments
No Comments
Vote & Comment
Leave a comment...
(Maximum 900 words)