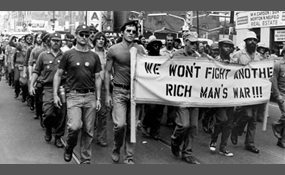 One of my favorite genres

"Holiday" is a song by the American punk rock band Green Day. It was released as the third single from their seventh studio album American Idiot. The song is in the key of F minor. Though the song is a prelude to "Boulevard of Broken Dreams", "Holid... ay" was released as a single later on, in the spring of 2005. The song achieved considerable popularity across the world and performed moderately well on the charts. In the U.S., it reached number nineteen on the Billboard Hot 100 and number one on the Hot Modern Rock Tracks and Hot Mainstream Rock Tracks charts. It debuted at number eleven in the UK and at number twenty-one in Canada. The song has been featured in the 2006 comedy film, Accepted, and has also been used as the goal song by the Vancouver Canucks in the NHL   more
5 votes
0 comments
Holiday - Voter Comments
No Comments
Vote & Comment
2

Killing in the Name of-Rage Against the Machine

We Didn't Start the Fire-Billy Joel

"We Didn't Start the Fire" is a song by Billy Joel. Its lyrics include brief, rapid-fire allusions to more than 100 headline events between 1949, the year of Joel's birth, and 1989, when the song was released on his album Storm Front. The song was a...  No. 1 hit in the US   more
2 votes
0 comments
We Didn't Start the Fire-Billy Joel - Voter Comments
No Comments
Vote & Comment
4

Take the Power Back-Killing in the Name of

Blowin' in the Wind-Bob Dylan

For What It's Worth-Buffalo Springfield

"For What It's Worth" is a song written by Stephen Stills. It was performed by Buffalo Springfield, recorded on December 5, 1966, and released as a single in January 1967; it was later added to the re-release of their first album, Buffalo Springfiel... d. The single peaked at number seven on the Billboard Hot 100 chart. This song is currently ranked #63 on Rolling Stone's list of The 500 Greatest Songs of All Time as well as the eighth best song of 1967 by Acclaimed Music   more
1 vote
0 comments
For What It's Worth-Buffalo Springfield - Voter Comments
No Comments
Vote & Comment
7

"Eve of Destruction" is a protest song written by P. F. Sloan in 1965. Several artists have recorded it, but the best-known recording was by Barry McGuire. This recording was made between July 12 and July 15, 1965 and released by Dunhill Records. Th... e accompanying musicians were top-tier LA session players: P. F. Sloan on guitar, Hal Blaine on drums, and Larry Knechtel on bass. The vocal track was thrown on as a rough mix and was not intended to be the final version, but a copy of the recording "leaked" out to a DJ, who began playing it. The song was an instant hit and as a result the more polished vocal track that was at first envisioned was never recorded.McGuire's single hit #1 on the US Billboard Hot 100 and #3 on the UK Singles Chart in September 1965   more
1 vote
0 comments
Eve of Destruction-Barry Mcguire - Voter Comments
No Comments
Vote & Comment
8

"Southern Man" is a song by Neil Young from his album After the Gold Rush. The album was released in 1970. An extended live version can be heard on the Crosby Stills Nash & Young album 4 Way Street.
0 votes
0 comments
Southern Man-Neil Young - Voter Comments
No Comments
Vote & Comment
10

"Ohio" is a protest song and counterculture anthem written and composed by Neil Young in reaction to the Kent State shootings of May 4, 1970, and performed by Crosby, Stills, Nash & Young. It was released as a single, backed with Stephen Stills's "F... ind the Cost of Freedom", peaking at number 14 on the US Billboard Hot 100. Although a live version of the song was included on the group's 1971 double album Four Way Street, the studio versions of both songs did not appear on an LP until the group's compilation So Far was released in 1974. The song also appeared on the Neil Young compilation albums Decade, released in 1977, and Greatest Hits, released in 2004.The song also appears on Neil Young's Live at Massey Hall album, which he recorded in 1971 but did not release until 2007   more
0 votes
0 comments
Ohio-Neil Young - Voter Comments
No Comments
Vote & Comment
Leave a comment...
(Maximum 900 words)