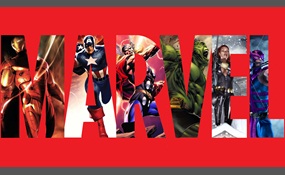 Jvidela says2015-04-27T12:19:06.5093503-05:00
Report Post
Batman is not a official super hero many people may say but dose it that make him better because he dose not need super powers to make him amazing not only that but he is a genius just look at his house and then look at the bat mobile alone now that is what i call talent!

Daredevil is a fictional character, a superhero that appears in comic books published by Marvel Comics. The character was created by writer-editor Stan Lee and artist Bill Everett, with an unspecified amount of input from Jack Kirby, and first appea... red in Daredevil #1.Living in the Hell's Kitchen neighborhood of New York City, Matt Murdock is blinded by a radioactive substance that falls from an oncoming vehicle. While he no longer can see, the radioactive exposure heightens his remaining senses beyond normal human ability. His father, a boxer named Jack Murdock, supports him as he grows up, though Jack is later killed by gangsters after refusing to throw a fight. After donning a yellow and dark red, and later an all dark red costume, Matt seeks out revenge against his father's killers as the superhero Daredevil, fighting against his many enemies including Bullseye and the Kingpin. Daredevil's nickname is "the Man Without Fear"   more
1 vote
0 comments
Daredevil - Voter Comments
No Comments
Vote & Comment
9

Any that have been created by Stan Lee

Charles Xavier is a fictional superhero who appears in American comic books published by Marvel Comics as well as in a number of television and movie adaptations. The character was created in 1963 by writer Stan Lee and artist Jack Kirby, and has be... en a frequent if not regular character in most X-Men-related fiction since the beginning.Xavier is a member of a fictional sub-species of humanity known as mutants, who are born with superhuman abilities. He is a powerful telepath who can read and control minds. He is the founder of the X-Men and runs a private school that shelters and trains mutants. He fights for peace and equality between humans and mutants in a world where anti-mutant bigotry is widespread   more
0 votes
0 comments
Professor X - Voter Comments
No Comments
Vote & Comment
11