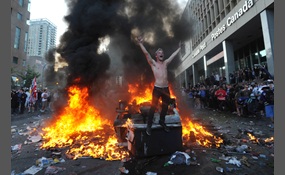 Which type of these genres makes you want to break the system apart with your bare hands!

Gangsta rap is a subgenre of hip hop music that evolved from hardcore hip hop. The genre was pioneered in the mid-1980s by rappers such as Schoolly D and Ice-T, and was popularized in the later part of the 1980s by groups like N.W.A. After the natio... nal attention that Ice-T and N.W.A attracted in the late 1980s and early 1990s, gangsta rap became the most commercially lucrative subgenre of hip hop. Some gangsta rappers have been associated, or allegedly have ties with the Bloods or Crips gangs.The subject matter inherent in gangsta rap has caused a great deal of controversy. Criticism has come from both left wing and right wing commentators, as well as religious leaders, who have accused the genre of promoting crime, serial killing, violence, profanity, sex addiction, homophobia, racism, promiscuity, misogyny, rape, street gangs, drive-by shootings, vandalism, thievery, drug dealing, alcohol abuse, substance abuse, disregarding law enforcement, materialism, and narcissism. The White House administrations of both George H. W. Bush and Bill Clinton criticized the genre   more
2 votes
0 comments
Gangsta rap - Voter Comments
No Comments
Vote & Comment
3

Heavy metal is a genre of rock music that developed in the late 1960s and early 1970s, largely in the United Kingdom and the United States. With roots in blues rock and psychedelic rock, the bands that created heavy metal developed a thick, massive ... sound, characterized by highly amplified distortion, extended guitar solos, emphatic beats, and overall loudness. Heavy metal lyrics and performance styles are often associated with masculinity, aggression and machismo.The first heavy metal bands such as Led Zeppelin, Deep Purple and Black Sabbath attracted large audiences, though they were often derided by critics, a status common throughout the history of the genre. During the mid-1970s, Judas Priest helped spur the genre's evolution by discarding much of its blues influence; Motörhead introduced a punk rock sensibility and an increasing emphasis on speed. Bands in the New Wave of British Heavy Metal such as Iron Maiden and Saxon followed in a similar vein. Before the end of the decade, heavy metal fans became known as "metalheads" or "headbangers".During the 1980s, glam metal became a commercial force with groups like Mötley Crüe and Poison   more
1 vote
0 comments
Heavy metal - Voter Comments
No Comments
Vote & Comment
4

Hardcore is a sub-genre of electronic dance music originally European from the emergent raves in the 1990s initially designed at Rotterdam in Netherlands derived from techno. Its sub-genres are usually distinct from the other electronic dance musics...  by a higher rapidity, the intensity of the kicks and the basses, the rhythm and the atmosphere of their theme, the usage of saturation and experimentation close to the industrial music   more
1 vote
0 comments
Hardcore - Voter Comments
No Comments
Vote & Comment
Leave a comment...
(Maximum 900 words)