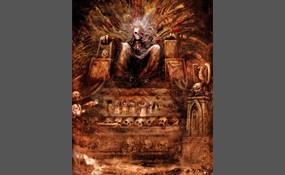 We all know Adeptus Mechanicus is best faction (Gives the evil eye to those that disagree) Who comes in close second?

In the fictional universe of Warhammer 40,000, the Necrons are a race and a playable army in the tabletop miniatures wargame. They are an ancient race of skeleton-like robots who are awakening from an aeons-long slumber and fighting to reclaim the g... alaxy from the younger races   more
2 votes
0 comments
Necrons - Voter Comments
No Comments
Vote & Comment
2

In the fictional universe of Warhammer 40,000, the Dark Eldar are a race and a playable army in the tabletop miniatures wargame.The Dark Eldar are the depraved cousins of the Eldar. They kidnap people so that they may torture them and feed off psych... ic energy produced by their victims' agony   more
1 vote
0 comments
Dark Eldar - Voter Comments
No Comments
Vote & Comment
4

Armies of the Imperium

Warhammer 40,000 is a tabletop miniature wargame produced by Games Workshop, set in a dystopian science-fantasy universe. Warhammer 40,000 was created by Rick Priestley in 1987 as the futuristic companion to Warhammer Fantasy Battle, sharing many ga... me mechanics. Expansions for Warhammer 40,000 are released periodically which give rules for urban, planetary siege and large-scale combat. The game is in its seventh edition, which was released on May 24, 2014.Players can assemble and paint individual, 28-millimetre scale miniature figures that represent futuristic soldiers, creatures and vehicles of war. These figurines are collected to compose squads in armies that can be pitted against those of other players. Each player brings a roughly equal complement of units to a tabletop battlefield with handmade or purchased terrain. The players then decide upon a scenario, ranging from simple skirmishes to complex battles involving defended objectives and reinforcements. The models are physically moved around the table and the actual distance between models plays a role in the outcome of combat. Play is turn-based, with various outcomes determined by tables and the roll of dice   more
0 votes
0 comments
Armies of the Imperium - Voter Comments
No Comments
Vote & Comment
5

In the fictional universe of Warhammer 40,000, the Squats are a dwarf-like race descended from the humans that colonised high gravity worlds. Separated from the rest of humanity over the millennia, they evolved their own distinct morphology and cult... ure. Squats were discontinued from the game in the 1990s by Games Workshop though their existence remains somewhat canon. Their omission from the game was explained by a Tyranid invasion of their Home Worlds wiping them out almost to a man. The survivors were then assimilated into the Imperium, however there are rumours that the squats created Tau technology which despite being younger than the Imperium, is more advanced   more
0 votes
0 comments
Squat - Voter Comments
No Comments
Vote & Comment
6

In the fictional setting of Warhammer 40,000, the Eldar are a race and playable army in the tabletop miniatures wargame. They are patterned after the High Elves of fantasy fiction; long-lived, arrogant, and possessing great psychic powers. The Eldar...  once ruled the galaxy and seek to reclaim their old dominions from humanity   more
0 votes
0 comments
Eldar - Voter Comments
No Comments
Vote & Comment
7

The Kroot are a fictional species in the Warhammer 40,000 game universe. Warhammer 40,000 is a game produced by Games Workshop.In the game, they are a species of ferocious carnivores that resemble avian creatures. They are aligned with the Tau Empir... e, and contribute auxiliaries to the Tau Hunter Cadres. However, they do also work outside of "The Greater Good" as mercenaries frequently.The Kroot first appeared as a playable race in late 2001; the result of Games Workshop's plan to introduce a new race to the game. However, the first appearance of a Kroot was in the 3rd Edition Warhammer 40,000 rulebook, in a sketch entitled "Other Dangerous Aliens".The Kroot are a subset of the Tau playable army, although special rules have been released to field armies entirely composed of Kroot, or as allies to other forces   more
0 votes
0 comments
Kroot Mercs - Voter Comments
No Comments
Vote & Comment
9

In the fictional universe of Warhammer 40,000, the Orks are a race and a playable army in the tabletop miniatures wargame. Alongside the Space Marines, Orks are one of the most iconic elements of the Warhammer 40,000 universe.Orks revel in violence ... for its own sake; their entire culture revolves around warfare. They are the oldest, most widespread and persistent of the Imperium's enemies. Their simplistic personalities, reckless tactics and ramshackle technology make them the comic relief characters of the setting   more
0 votes
0 comments
Ork - Voter Comments
No Comments
Vote & Comment
10

In the fictional universe of Warhammer 40,000, the Tyranids are a race and a playable army in the tabletop miniatures wargame.The Tyranids are aliens from outside the galaxy who have come to devour all life, one planet at a time. Though they collect... ively possess a powerful intelligence, they cannot be reasoned with. Tyranids come in diverse forms, each individual having been engineered to fulfill a specific role. All of their technology is biological   more
0 votes
0 comments
Tyranids - Voter Comments
No Comments
Vote & Comment
11