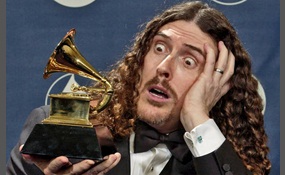 They are all so good

1 vote
1 comment
They are all so good - Voter Comments

"The Saga Begins" is a parody song by "Weird Al" Yankovic of "American Pie" by Don McLean, with lyrics that humorously summarize the plot of the film Star Wars Episode I: The Phantom Menace through the point of view of Obi-Wan Kenobi, one of the lea... d protagonists of the film.The song's title, not mentioned anywhere in the lyrics, derives from a tagline that appeared in teaser trailers and the film poster for The Phantom Menace: "Every saga has a beginning"."The Saga Begins" was released as a single from the 1999 album Running with Scissors, and later appearing on the compilation album titled The Saga Begins   more
1 vote
0 comments
The Saga Begins - Voter Comments
No Comments
Vote & Comment
7