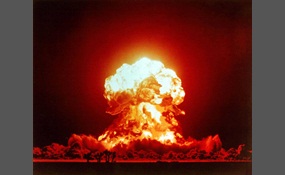 Guns should be banned.

The creation–evolution controversy involves a recurring cultural, political, and theological dispute about the origins of the Earth, of humanity, and of other life. This debate rages most publicly in the United States, and to a lesser extent in Euro... pe and elsewhere, often portrayed as part of a culture war.The level of support for evolution is extremely high within the scientific community and in academia, with 95% of scientists supporting evolution. Support for Abrahamic religions' accounts or other creationist alternatives is very low among scientists, and virtually nonexistent among scientists in the relevant fields.Christian fundamentalists dispute the evidence of common descent of humans and other animals as demonstrated in modern paleontology, genetics, histology and cladistics and those other sub-disciplines which are based upon the conclusions of modern evolutionary biology, geology, cosmology, and other related fields. They argue for the Abrahamic accounts of creation, framing them as reputable science   more
0 votes
0 comments
Evoultionism vs Creationism - Voter Comments
No Comments
Vote & Comment
7

Evil Does Not Exist

Anything that attracts trolls

The picture shows what inevitably happens to such a thread, either by post limit or mod/admin intervention.
0 votes
0 comments
Anything that attracts trolls - Voter Comments
No Comments
Vote & Comment
9

Anything about Terrorism and Islam

Barack Hussein Obama II (/bəˈrɑːk huːˈseɪn oʊˈbɑːmə/; born August 4, 1961) is the 44th and current President of the United States. He is the first African American to hold the office. Obama served as a U.S. Senator representing the state of Illinois...  from January 2005 to November 2008, when he resigned following his victory in the 2008 presidential election.Born in Honolulu, Hawaii, Obama is a graduate of Columbia University and Harvard Law School, where he was the president of the Harvard Law Review. He was a community organizer in Chicago before earning his law degree. He worked as a civil rights attorney in Chicago and taught constitutional law at the University of Chicago Law School from 1992 to 2004. He served three terms representing the 13th District in the Illinois Senate from 1997 to 2004   more
0 votes
0 comments
Barack Obama - Voter Comments
No Comments
Vote & Comment
11

Abortion is the ending of pregnancy by the removal or forcing out from the womb of a fetus or embryo before it is able to survive on its own. An abortion can occur spontaneously, in which case it is often called a miscarriage. It can also be purpose... ly caused in which case it is known as an induced abortion. The term abortion most commonly refers to the induced abortion of a human pregnancy. The similar procedure after the fetus may be able to survive on its own is medically known as a "late termination of pregnancy".Modern medicine uses medications or surgical methods for induced abortion. The two medications mifepristone and prostaglandin are as effective as a surgical method in the first trimester. While the use of medications may be effective in the second trimester, surgical methods appear to have a lower risk of side effects. Birth control, including the pill and intrauterine devicess can be started immediately after an abortion. Abortion in the developed world has a long history of being among the safest procedures in medicine when allowed by local law. Uncomplicated abortions do not cause either long term mental health or physical problems   more
0 votes
0 comments
Abortion - Voter Comments
No Comments
Vote & Comment
12

The Israeli–Palestinian conflict is the ongoing struggle between Israelis and Palestinians that began in the mid-20th century. The conflict is wide-ranging, and the term is sometimes also used in reference to the earlier sectarian conflict in Mandat... ory Palestine, between the Zionist yishuv and the Arab population under British rule. The Israeli–Palestinian conflict has formed the core part of the wider Arab–Israeli conflict. It has widely been referred to as the world's "most intractable conflict".Despite a long-term peace process and the general reconciliation of Israel with Egypt and Jordan, Israelis and Palestinians have failed to reach a final peace agreement. The remaining key issues are: mutual recognition, borders, security, water rights, control of Jerusalem, Israeli settlements, Palestinian freedom of movement, and resolving Palestinian claims of a right of return for their refugees   more
0 votes
0 comments
Israeli–Palestinian conflict - Voter Comments
No Comments
Vote & Comment
13

UtherPenguin says2015-06-04T17:00:50.4208759-05:00
Report Post
@Kreakin I thought it was you because when i got the poll option I then got a notification saying "Kreakin and CannedBread added answers to the poll" Given that the picture was biased against those that are "pro" to the existence of God I then assumed it was you, since CannedBread is Jewish (at least it says on his profile) and Jews believe in God. But I wasn't sure what religion (or lack thereof) that you were, so I assumed it was you.