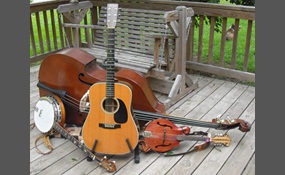 Bluegrass music is a form of American roots music, and a subgenre of country music. Bluegrass was inspired by the music of Appalachia. It has mixed roots in Irish, Scottish, Welsh, and English traditional music, and also later influenced by the musi... c of African-Americans through incorporation of jazz elements. Settlers from the United Kingdom and Ireland arrived in Appalachia during the 18th century, and brought with them the musical traditions of their homelands. These traditions consisted primarily of English and Scottish ballads—which were essentially unaccompanied narrative—and dance music, such as Irish reels, which were accompanied by a fiddle. Many older bluegrass songs come directly from the British Isles. Several Appalachian bluegrass ballads, such as "Pretty Saro", "Barbara Allen", "Cuckoo Bird" and "House Carpenter", come from England and preserve the English ballad tradition both melodically and lyrically. Others, such as The Twa Sisters, also come from England; however, the lyrics are about Ireland. Some bluegrass fiddle songs popular in Appalachia, such as "Leather Britches", and "Pretty Polly", have Scottish roots   more
8 votes
0 comments
Bluegrass - Voter Comments
No Comments
Vote & Comment
2

Country music is a genre of American popular music that originated in Southern United States, in Atlanta, Georgia in the 1920s. It takes its roots from the southeastern genre of American folk music and Western music. Blues modes have been used exten... sively throughout its recorded history. Country music often consists of ballads and dance tunes with generally simple forms and harmonies accompanied by mostly string instruments such as banjos, electric and acoustic guitars, fiddles, and harmonicas. The term country music gained popularity in the 1940s in preference to the earlier term hillbilly music; it came to encompass Western music, which evolved parallel to hillbilly music from similar roots, in the mid-20th century. The term country music is used today to describe many styles and sub genres. The origins of country music are the folk music of mostly white, working-class Americans, who blended popular songs, Irish and Celtic fiddle tunes, traditional ballads, and cowboy songs, and various musical traditions from European immigrant communities   more
0 votes
0 comments
Country - Voter Comments
No Comments
Vote & Comment
No comments yet.
Leave a comment...
(Maximum 900 words)
Privacy Policy | Terms of Use
Sitemap | View Desktop Version
©2020 Debate.org. All rights reserved.