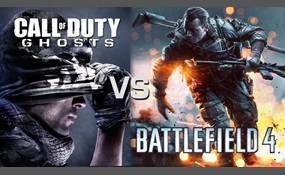 Battlefield is a series of first-person shooter video games that started out on Microsoft Windows and OS X with its debut video game, Battlefield 1942, which was released in 2002. The series is developed by Swedish company EA Digital Illusions CE an... d is published by American company Electronic Arts. The series features a greater focus on large maps, teamwork and vehicle warfare than traditional first-person shooters. The PC games in the series are mainly focused on online multiplayer. The Battlefield series has served more than 50 million players worldwide as of 2012, across 11 games and 12 expansion packs released since its inception in 2007. The series has a recognizable 6-beat sting   more
12 votes
2 comments
Battlefield - Voter Comments

TheTrueSeven says2014-06-19T14:56:31.0506590-05:00
Report Post
I would like to apologize in advance for my vote on CoD but I just cant use the "same old crap" excuse for voting for battlefield anymore. As it turns out, battlefield is a dying franchise, run by a money hungry company. The more battlefield charges for regular in-game items, the more I wonder which is the better franchise. Call of Duty has changed a lot over these years and I really do give them credit for that. However I feel as if Battlefield 4 really hasn't stepped up to the plate when it comes to new and innovative ideas. It's the same old BF3 ran on a different engine. Call of Duty however hasn't killed off it's PC followers with a crappy online web-browser matchmaking system and has continually upgraded their game every year. That paired with the fact that they dont charge actual money for gun and knife reskins, I'm siding with CoD on this one. Sorry Battlefield but you need to go big or go home.
Privacy Policy | Terms of Use
Sitemap | View Desktop Version
©2021 Debate.org. All rights reserved.