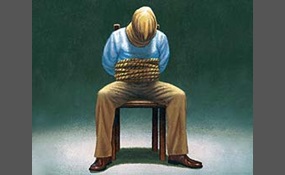 Can torture be justified?

Imagine you are an agent trying to save people's lives. There is a bomb hidden in the city that has the potential to kill 50 people. You have captured a man who you have reason to believe knows the location of the bomb. If you know the location you can disarm it and save lives. But the man refuses to tell you anything. You try to torture the information out of him, but he's won't tell you no matter how you torture him. In your custody, you also have his 7 year old innocent daughter who he loves very much. I

The torture will be extremely painful and you will have the father watch.
8 votes
1 comment
Torture the innocent 7 year old girl - Voter Comments

Do nothing and allow the bomb to explode

Take your chances. Who knows? Maybe the bomb was a dud?
5 votes
0 comments
Do nothing and allow the bomb to explode - Voter Comments
No Comments
Vote & Comment
Leave a comment...
(Maximum 900 words)

Hessian_Oosterhout says2017-11-28T22:06:50.9471003Z
Report Post
What if the man lies about things, like the location of the bombs or the number of bombs, these would both be answers he could give. A similiar incident happened when japanese soldiers captured a us airmen and lied that the us had hundreds of atomic bombs when he was being tortured. These types of though experiments are of the most contrived variety. Better, promise an education to the daughter, or some other financial incentive if they are from shitty country with the gdp that could barely float a hat. This is what actually often happens. Sorry hollywood.
Privacy Policy | Terms of Use
Sitemap | View Desktop Version
©2022 Debate.org. All rights reserved.