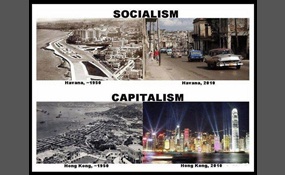 Capitalism is an economic system in which trade, industry, and the means of production are largely or entirely privately owned and operated for profit. Central characteristics of capitalism include capital accumulation, competitive markets and wage ... labour. In a capitalist economy, the parties to a transaction typically determine the prices at which assets, goods, and services are exchanged.The degree of competition, role of intervention and regulation, and scope of public ownership varies across different models of capitalism. Economists, political economists, and historians have taken different perspectives in their analysis of capitalism and recognized various forms of it in practice. These include laissez-faire capitalism, welfare capitalism and state capitalism; each highlighting varying degrees of dependency on markets, public ownership, and inclusion of social policies. The extent to which different markets are free, as well as the rules defining private property, is a matter of politics and policy. Many states have what are termed capitalist mixed economies, referring to a mix between planned and market-driven elements   more
25 votes
5 comments
Capitalism - Voter Comments

spiderek1 says2014-07-22T11:57:50.9579230-05:00
Report Post
The idea of Socialism has been proven wrong during the fall of Communism, I am a Nationalist Conservative and I believe that Socialists would never have a motive to work because Socialists would just give free money and food.

Socialism is a social and economic system characterised by social ownership of the means of production and co-operative management of the economy, as well as a political theory and movement that aims at the establishment of such a system. "Social ow... nership" may refer to cooperative enterprises, common ownership, state ownership, citizen ownership of equity, or any combination of these. There are many varieties of socialism and there is no single definition encapsulating all of them. They differ in the type of social ownership they advocate, the degree to which they rely on markets or planning, how management is to be organised within productive institutions, and the role of the state in constructing socialism.A socialist economic system is based on the organisational precept of production for use, meaning the production of goods and services to directly satisfy economic demand and human needs where objects are valued based on their use-value or utility, as opposed to being structured upon the accumulation of capital and production for profit   more
10 votes
3 comments
Socialism - Voter Comments

Ismist says2014-08-04T19:31:02.4747129-05:00
Report Post
Workers' self-management and common ownership of the means of production is freaking awesome. I want the majority to have control of the economy instead of a small minority.
Vote & Comment
Leave a comment...
(Maximum 900 words)

mzavarella30 says2014-07-16T11:56:16.3652240-05:00
Report Post
Standard oil was getting out of hand. Another part of Capitalism is competition. If TR didn't come down on Standard Oil then there would be no chance of any competition ever arising in the oil industry again to challenge them. You can try to stretch this to argument to support socialism, but in practice, he was supporting competition and thus capitalism.

Formerland1 says2014-07-17T00:58:14.7475279-05:00
Report Post
Both do not end as intended , if no economic system works another variable must be at fault ( something about us ) That would mean that both systems would work well if we could get rid of the problem . However scocialism usually leads to oppression ect. So capitalism is best for preserving a good way of life.

SweetTea says2014-07-17T03:48:03.2528187-05:00
Report Post
Mzavarella30 ... I said (repeatedly) "in principle". When TR made it easier for others (through regs), that is the principle of socialism (to think of everybody). It doesn't take a "stretch" of imagination to understand that. Here's another thought ... Many consider the 2008 bailouts by Bush to be Socialism. In true Capitalism, companies start & fail. A government hand-out isn't part of it! Http://www.Pbs.Org/newshour/making-sense/trillions-of-dollars-in-bank-b/

labarum says2014-07-17T11:03:02.6967128-05:00
Report Post
Actually, The monopoly that standard oil had, quite a bit of it was government instituted. Not all, but quite a bit. The super monopoly under a capitalist system had to be broken up. And yeah, the Bush bailouts was socialism.