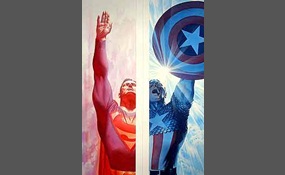 Who is better as a superhero and why

Superman is a 1978 British-American superhero film directed by Richard Donner. It is based on the DC Comics character of the same name and stars Marlon Brando, Gene Hackman, Christopher Reeve, Margot Kidder, Glenn Ford, Phyllis Thaxter, Jackie Coope... r, Trevor Howard, Marc McClure, Terrence Stamp, Valerie Perrine and Ned Beatty. The film depicts Superman's origin, including his infancy as Kal-El of Krypton and his youthful years in the rural town of Smallville. Disguised as reporter Clark Kent, he adopts a mild-mannered disposition in Metropolis and develops a romance with Lois Lane, while battling the villainous Lex Luthor.Several directors, most notably Guy Hamilton, and screenwriters were associated with the project before Donner was hired to direct. Tom Mankiewicz was drafted in to rewrite the script and was given a "creative consultant" credit. It was decided to film both Superman and Superman II simultaneously, with principal photography beginning in March 1977 and ending in October 1978. Tensions rose between Donner and the producers, and a decision was made to stop filming the sequel—of which 75 percent had already been completed—and finish the first film   more
2 votes
0 comments
Superman - Voter Comments
No Comments
Vote & Comment
No comments yet.
Leave a comment...
(Maximum 900 words)
Privacy Policy | Terms of Use
Sitemap | View Desktop Version
©2021 Debate.org. All rights reserved.