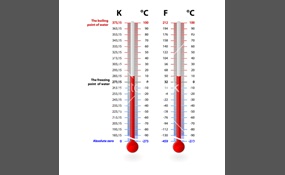 Celsius or Fahrenheit or Kelvin?

Celsius, also known as centigrade, is a scale and unit of measurement for temperature. It is named after the Swedish astronomer Anders Celsius, who developed a similar temperature scale. The degree Celsius can refer to a specific temperature on the ... Celsius scale as well as a unit to indicate a temperature interval, a difference between two temperatures or an uncertainty. The unit was known until 1948 as "centigrade" from the Latin centum translated as 100 and gradus translated as "steps".From 1744 until 1954, 0 °C was defined as the freezing point of water and 100 °C was defined as the boiling point of water, both at a pressure of one standard atmosphere with mercury being the working material. Although these defining correlations are commonly taught in schools today, by international agreement the unit "degree Celsius" and the Celsius scale are currently defined by two different temperatures: absolute zero, and the triple point of VSMOW. This definition also precisely relates the Celsius scale to the Kelvin scale, which defines the SI base unit of thermodynamic temperature with symbol K   more
8 votes
4 comments
Celsius - Voter Comments

Fahrenheit is a temperature scale based on one proposed in 1724 by the German physicist Daniel Gabriel Fahrenheit, after whom the scale is named. On Fahrenheit's original scale the lower defining point was the lowest temperature to which he could re... producibly cool brine, while the highest was that of the average human core body temperature. There exist several stories on the exact original definition of his scale; however, some of the specifics have been presumed lost or exaggerated with time. The scale is now usually defined by two fixed points: the temperature at which water freezes into ice is defined as 32 degrees, and the boiling point of water is defined to be 212 degrees, a 180-degree separation, as defined at sea level and standard atmospheric pressure.By the end of the 20th century, most countries used the Celsius scale, rather than the Fahrenheit scale. Fahrenheit remains the official scale for the following countries and territories: the Bahamas, Belize, the Cayman Islands, Palau, and the United States and its associated territories of American Samoa and the U.S. Virgin Islands. Canada retains it as a supplementary scale that can be used alongside Celsius   more
4 votes
2 comments
Fahrenheit - Voter Comments

The kelvin is a unit of measure for temperature. It is one of the seven base units in the International System of Units and is assigned the unit symbol K. The Kelvin scale is an absolute, thermodynamic temperature scale using as its null point absol... ute zero, the temperature at which all thermal motion ceases in the classical description of thermodynamics. The kelvin is defined as the fraction ¹⁄273.16 of the thermodynamic temperature of the triple point of water. In other words, it is defined such that the triple point of water is exactly 273.16 K.The Kelvin scale is named after the Belfast-born, Glasgow University engineer and physicist William Thomson, 1st Baron Kelvin, who wrote of the need for an "absolute thermometric scale". Unlike the degree Fahrenheit and degree Celsius, the kelvin is not referred to or typeset as a degree. The kelvin is the primary unit of measurement in the physical sciences, but is often used in conjunction with the degree Celsius, which has the same magnitude. Subtracting 273.16 K from the temperature of the triple point of water makes absolute zero equivalent to −273.15 °C   more
3 votes
1 comment
Kelvin - Voter Comments