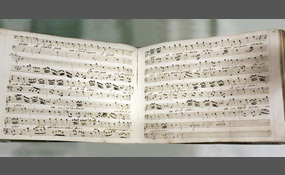 Classical music is art music produced or rooted in the traditions of Western music. It encompasses a broad period from roughly the 11th century to the present day. The central norms of this tradition became codified between 1550 and 1900, which is k... nown as the common practice period.European music is largely distinguished from many other non-European and popular musical forms by its system of staff notation, in use since about the 16th century. Western staff notation is used by composers to prescribe to the performer the pitch, speed, meter, individual rhythms and exact execution of a piece of music. This leaves less room for practices such as improvisation and ad libitum ornamentation, which are frequently heard in non-European art music and in popular music.The term "classical music" did not appear until the early 19th century, in an attempt to distinctly "canonize" the period from Johann Sebastian Bach to Beethoven as a golden age. The earliest reference to "classical music" recorded by the Oxford English Dictionary is from about 1836   more
13 votes
5 comments
Classical music - Voter Comments

Heavy metal is a genre of rock music that developed in the late 1960s and early 1970s, largely in the United Kingdom and the United States. With roots in blues rock and psychedelic rock, the bands that created heavy metal developed a thick, massive ... sound, characterized by highly amplified distortion, extended guitar solos, emphatic beats, and overall loudness. Heavy metal lyrics and performance styles are often associated with masculinity, aggression, and machismo.The first heavy metal bands such as Led Zeppelin, Deep Purple and Black Sabbath attracted large audiences, though they were often derided by critics, a status common throughout the history of the genre. During the mid-1970s, Judas Priest helped spur the genre's evolution by discarding much of its blues influence; Motörhead introduced a punk rock sensibility and an increasing emphasis on speed. Bands in the New Wave of British Heavy Metal such as Iron Maiden and Saxon followed in a similar vein. Before the end of the decade, heavy metal fans became known as "metalheads" or "headbangers".During the 1980s, glam metal became a commercial force with groups like Mötley Crüe and Poison   more
13 votes
4 comments
Heavy metal - Voter Comments