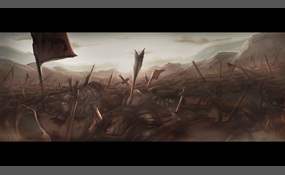 War Scenarios are fine and all, but what will you do when you have the fate of many dependent on you, this is Command and Conquer. You are a lord that has been put in charge of the King's men to see victory over invaders whom have trespassed into the country, the enemy has crossed the border and are marching on a small hamlet near the coast. Your forces are assembled but the enemy will be upon the hamlet in 2 days. What do you do?

You dispatch small companies of troops to the outlying forestry around the trails leading to the castle and villages, you may not be able to rally as many levies from the nearby villages but you will be able to harass and delay the invaders on their...  march to you   more
3 votes
0 comments
Assume Guerrilla Tactics - Voter Comments
No Comments
Vote & Comment
2

You can beat the invaders to the hamlet if you force march your men through the night. You're men will be very tired near the end of the march but you will have arrived in time to prep some defenses before they arrive.
1 vote
1 comment
Force March - Voter Comments

YamaVonKarma says2015-04-08T15:46:31.0375157-05:00
Report Post
After we destroy their forces, we shalt march into their territory. We will then pillage everything and enslave everyone we find. Upon entering their capital, we will have their king blinded, castrated and cast into the ocean for his foolishness.
Vote & Comment
3

You might not be able to beat the invaders to the village without tiring your troops, but your advisers tell you that you will likely arrive at the hamlet in the midst of the attack. Some of the village may be destroyed, but you can engage the enemy...  during their raid when their ranks aren't formed   more
1 vote
1 comment
Intercept - Voter Comments

You won't be able to make it to the village in time to keep your men fresh, so you must abandon it to its fate. Rather you look to fortify the castle and its surrounding villages that are closer at hand by erecting barricades and levying more men fo... r service. It is an unfortunate sacrifice but there is little else you can do but wait   more
0 votes
0 comments
Consolidate - Voter Comments
No Comments
Vote & Comment
5

You dispatch your troops to burn everything between you and the invaders - the forests, crops, and buildings - to deprive the invaders of much needed resources for their supply lines. Other nobles and the peasantry will be outraged, but the enemy wi... ll be hard pressed for resources and may suffer from attrition if they choose to march on   more
0 votes
0 comments
Scorched Earth - Voter Comments
No Comments
Vote & Comment
Leave a comment...
(Maximum 900 words)