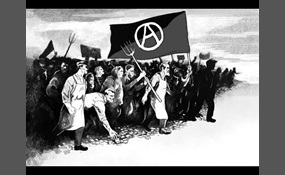 Anarchy refers to a society without a publicly enforced government. When used in the negative sense, anarchy implies political disorder or lawlessness within a society. Pierre-Joseph Proudhon adopted the term in his 1840 treatise What Is Property? T... o refer to a new political philosophy, anarchism, which advocates stateless societies based on voluntary associations. Many anarchists, like Anselme Bellegarrigue, have complained that "[v]ulgar error has taken 'anarchy' to be synonymous with 'civil war.'   more
14 votes
4 comments
Anarchy - Voter Comments

Communism is a socioeconomic system structured upon common ownership of the means of production and characterized by the absence of social classes, money, and the state; as well as a social, political and economic ideology and movement that aims to ... establish this social order. The movement to develop communism, in its Marxist–Leninist interpretations, significantly influenced the history of the 20th century, which saw intense rivalry between the states which claimed to follow this ideology and their enemies.Communism is most associated with Marxism, which considers itself the embodiment of scientific socialism. According to Marxism, capitalism is a historically necessary stage of society, which has led to the concentration of social classes into two major groups: proletariat - who must work to survive, and who make up a majority of society - and bourgeoisie - a minority who derive profit from employing the proletariat, through private ownership of the means of production. The political, social, and economic conflict between both groups, each attempting to push their interests to their logical extreme, will lead into the capture of political power by the proletariat   more
11 votes
4 comments
Communism - Voter Comments

reece says2015-10-03T21:04:14.4247384Z
Report Post
@Bob13 All it needs is time.
Anonymous says2015-10-04T00:50:44.0644726Z
Report Post
Please view, read, and vote on my debate about Communism. I am the Pro in the debate.
Anonymous says2015-10-04T02:23:19.9543450Z
Report Post
Great one UtherPenguin, I shall become your Commander in the war effort and help lead our people to fight the Russians. First we shall send 67% of our troops in from the eastern front, leading the offensive head on with our Armored divisions. Then I will send 23% of our troops around to the south-eastern front, thus flanking the Russians and surrounding the remaining Red Army that was attacking the Armored division. In three months we will make it outside Moscow, after a series of bombings from our Penguin air force (the Penguin Royal Air force, PRF) and constant shelling of our Artillery array, I shall send in our armored division as well as our infantry. They will then reach the Kremlin and there they will destroy the weak president Vladimir Putin. "And that class was the rise and fall of the great Penguin-Sciguy empire and how they attempted to invade Russia and how they, though were near victory, were defeated at the battle of Moscow which was a turning point in the war." Said Mrs. Fracs. "So why did the dictator Penguin allow SciGuy to be the Commander in the first place?" Said Billy "He may have had impeccable military strategies but he committed multiple war crimes and ordered the bombings of countless civilian occupied territories." "Well, SciGuy did do a lot of these crimes but he was the man that would have won the Russian war. He was also in charge of propaganda." Said Mrs.. Fracs "This man was very intelligent when it came to his military tactics but not when it came down to being a proper human being. Penguin later committed suicide and his body captured and displayed in Moscow at the end of the war while Commander SciGuy was betrayed and killed by his troops two months prior to the wars end and......" *Bell rings* "Make sure to write a biography on SciGuy and the totalitarian leader UtherPenguin and to read the rest of the chapter, The Rise and Fall of the Penguin Empire: A Penguin at war as well as Commander SciGuy: War Criminal and Victor!" Said Mrs. Fracs Dedicated to the Penguin Empire. 2015-2021 and how the Commander, SciGuy, killed millions of POW's during the war.