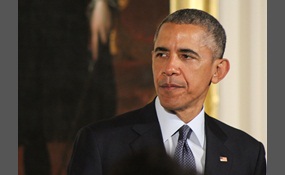 CONSERVATIVES: What religion do you think President Obama practices?

Christianityis a monotheistic religion centered on the life and teachings ofJesus of Nazareth as presented in the Holy Bible. Christiansbelieve Jesus to be the Son of God and the Messiah prophesied in theOld Testament. With an estimated 2.1 billion ... adherents in 2001,Christianity is the world's largest religion. It is the predominantreligion in Europe, the Americas, Sub-Saharan Africa, the PhilippineIslands, Australia, and New Zealand. Itis also growing rapidly in Asia, particularly in China and SouthKorea. Christianity began in the 1st century AD as a Jewishsect, and shares many religious texts with Judaism, specifically theHebrew Bible, known to Christians as the Old Testament. Like Judaism and Islam, Christianity is classified asan Abrahamic religion   more
9 votes
3 comments
Christianity - Voter Comments

FrankCM says2015-06-01T11:44:22.5676800-05:00
Report Post
What a man says and what a man does are two different things. I am not here to mock Obama nor am I here to question his faith. However, I do question what he puts his faith in. I'm inclined to believe that he is into new-age spiritualism, a one world religious concept.

Islam is a monotheistic and Abrahamic religion articulated by the Qur'an, a book considered by its adherents to be the verbatim word of God, and for some sects, also by the teachings and normative example of Muhammad, considered by them to be the la... st prophet of God. An adherent of Islam is called a Muslim.Muslims believe that God is one and incomparable and that the purpose of existence is to worship God. Muslims also believe that Islam is the complete and universal version of a primordial faith that was revealed many times before through prophets including Adam, Noah, Abraham, Moses, and Jesus. They maintain that the previous messages and revelations have been partially misinterpreted or altered over time, but consider the Arabic Qur'an to be both the unaltered and the final revelation of God. Religious concepts and practices include the five pillars of Islam, which are basic concepts and obligatory acts of worship, and following Islamic law, which touches on virtually every aspect of life and society, providing guidance on multifarious topics from banking and welfare, to family life and the environment   more
5 votes
0 comments
Islam - Voter Comments
No Comments
Vote & Comment
4

The religion of idiots. Such as Obama
1 vote
0 comments
Idiocy - Voter Comments
No Comments
Vote & Comment
8

Satanism, as codified in The Satanic Bible, is a religious philosophy founded in 1966 by Anton LaVey. Its core beliefs and philosophies are based on individualism, epicureanism, secularism, egoism, and self-deification, and propagates a worldview of...  naturalism, Social Darwinism, and Lex Talionis. Adherents to the philosophy have described Satanism as a non-spiritual religion of the flesh, or "...The word's first carnal religion".Additionally, Satanism involves the practice of magic, which encompasses two distinct forms; greater and lesser magic. Greater magic is a form of ritual practice and is meant as a self-transformational psychodrama to focus one's emotional energy for a specific purpose. Lesser magic is based on the laws of attraction and consists of using one's natural abilities to manipulate others. LaVey wrote extensively on the subject of magic and ritual in his works The Satanic Rituals and The Satanic Witch.Contrary to popular belief, Satanism does not involve "devil worship" or worship of any deities. It is an atheistic philosophy that asserts that "each individual is his or her own god [and that] there is no room for any other god"   more
1 vote
1 comment
LaVeyan Satanism - Voter Comments

Baptists are individuals who comprise a group of denominations and churches that subscribe to a doctrine that baptism should be performed only for professing believers, and that it must be done by complete immersion. Other tenets of Baptist churches...  include soul competency, salvation through faith alone, Scripture alone as the rule of faith and practice, and the autonomy of the local congregation. Baptists recognize two ministerial offices, pastors and deacons. Baptist churches are widely considered to be Protestant churches, though some Baptists disavow this identity.Diverse from their beginning, those identifying as Baptists today differ widely from one another in what they believe, how they worship, their attitudes toward other Christians, and their understanding of what is important in Christian discipleship.Historians trace the earliest church labeled "Baptist" back to 1609 in Amsterdam, with English Separatist John Smyth as its pastor. In accordance with his reading of the New Testament, he rejected baptism of infants and instituted baptism only of believing adults   more
0 votes
0 comments
Baptists - Voter Comments
No Comments
Vote & Comment
10

Buddhism is a nontheistic religion that encompasses a variety of traditions, beliefs and practices largely based on teachings attributed to Siddhartha Gautama, who is commonly known as the Buddha, meaning "the awakened one". According to Buddhist tr... adition, the Buddha lived and taught in the eastern part of the Indian subcontinent sometime between the 6th and 4th centuries BCE. He is recognized by Buddhists as an awakened or enlightened teacher who shared his insights to help sentient beings end their suffering through the elimination of ignorance and craving by way of understanding and the seeing of dependent origination and the Four Noble Truths, with the ultimate goal of attainment of the sublime state of Nirvana, by practicing the Noble Eightfold Path.Two major extant branches of Buddhism are generally recognized: Theravada and Mahayana. Theravada has a widespread following in Sri Lanka and Southeast Asia. Mahayana is found throughout East Asia and includes the traditions of Pure Land, Zen, Nichiren Buddhism, Tibetan Buddhism, Shingon, and Tiantai   more
0 votes
0 comments
Buddhism - Voter Comments
No Comments
Vote & Comment
11

Atheism is, in a broad sense, the rejection of belief in the existence of deities. In a narrower sense, atheism is specifically the position that there are no deities. Most inclusively, atheism is the absence of belief that any deities exist. Atheis... m is contrasted with theism, which, in its most general form, is the belief that at least one deity exists.The term "atheism" originated from the Greek ἄθεος, meaning "without god", used as a pejorative term applied to those thought to reject the gods worshiped by the larger society. With the spread of freethought, skeptical inquiry, and subsequent increase in criticism of religion, application of the term narrowed in scope. The first individuals to identify themselves using the word "atheist" lived in the 18th century. Some ancient and modern religions are referred to as atheistic, as they either have no concepts of deities or deny a creator deity, yet still revere other god-like entities.Arguments for atheism range from the philosophical to social and historical approaches   more
0 votes
0 comments
Atheism - Voter Comments
No Comments
Vote & Comment
12

Taoism is a philosophical, ethical, and religious tradition of Chinese origin that emphasizes living in harmony with the Tao. The term Tao means "way", "path" or "principle", and can also be found in Chinese philosophies and religions other than Tao... ism. In Taoism, however, Tao denotes something that is both the source and the force behind everything that exists.While Taoism drew its cosmological notions from the tenets of the School of Yin Yang, the Tao Te Ching, a compact and ambiguous book containing teachings attributed to Laozi, is widely considered its keystone work. Together with the writings of Zhuangzi, these two texts build the philosophical foundation of Taoism deriving from the 8 Hexagrams of Fu Xi in the 2700s BCE in China.Taoist propriety and ethics may vary depending on the particular school, but in general tends to emphasize wu-wei, "naturalness", simplicity, spontaneity, and the Three Treasures: compassion, moderation, and humility   more
0 votes
0 comments
Taoism - Voter Comments
No Comments
Vote & Comment
13

Confucianism, literally "The School of the Scholars," is a Chinese ethical and philosophical system originally developed from the teachings of the early Chinese sage Confucius. Confucianism is a complex system of moral, social, political, philosophi... cal, and religious thought which has had tremendous influence on the history of Chinese civilization up to the 21st century. Some people in the West have considered it to have been the "state religion" of Imperial China because of the Chinese government's promotion of Confucianist values   more
0 votes
0 comments
Confucianism - Voter Comments
No Comments
Vote & Comment
Leave a comment...
(Maximum 900 words)

FreedomBeforeEquality says2015-06-02T15:34:16.4291130-05:00
Report Post
Idk ... I think if he was into it that bad he wouldn't be living in that snazzy house of his and collecting a life long pension on our dime while there was even one citizen among us poor. No, I think he's just using the ideals to capitalize off the stupid. The king of the fools, as it were.

FreedomBeforeEquality says2015-06-02T15:36:45.1873858-05:00
Report Post
He's looking out for his own welfare like the rest of us. He's just found an easy way to get it by manipulating the right crowd of people.
Privacy Policy | Terms of Use
Sitemap | View Desktop Version
©2020 Debate.org. All rights reserved.