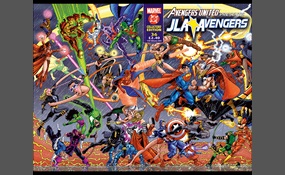 Aquaman is a fictional character, a superhero appearing in comic book titles by DC Comics. Created by Paul Norris and Mort Weisinger, the character debuted in More Fun Comics #73. Initially a backup feature in DC's anthology titles, Aquaman later st... arred in several volumes of a solo title. During the late 1950s and 1960s superhero-revival period known as the Silver Age, he was a founding member of the Justice League of America. In the 1990s Modern Age, Aquaman's character became more serious than in most previous interpretations, with storylines depicting the weight of his role as king of Atlantis.Later accounts reconciled both facets of the character, casting Aquaman as serious and brooding, saddled with an ill reputation, and struggling to find a true role and purpose beyond his public side as a deposed king and a fallen hero. The character will appear in the 2016 film Batman v Superman: Dawn of Justice, portrayed by Jason Momoa, with a solo film following in 2018   more
5 votes
3 comments
Aquaman - Voter Comments

The Vision is the name of a number of fictional characters, all superheroes, that appear in comic books published by Marvel Comics. The Vision is an android and a member of the Avengers. The character will be portrayed by Paul Bettany in the 2015 fi... lm Avengers: Age of Ultron   more
2 votes
0 comments
Vision - Voter Comments
No Comments
Vote & Comment
4

Hawkeye is a fictional character, a superhero that appears in comic books published by Marvel Comics. Created by writer Stan Lee and artist Don Heck, the character first appeared as a villain in Tales of Suspense #57 and later joined the Avengers in...  Avengers #16. He has been a prominent member of the team ever since. He was also ranked at #44 on IGN's Top 100 Comic Book Heroes list.Hawkeye is portrayed by Jeremy Renner in the Marvel Cinematic Universe, a shared fictional universe that is the setting of films produced by Marvel Studios. Renner first made an uncredited cameo appearance as Hawkeye in Thor and later reprised the role in The Avengers; he is set to return to the role a third time in Avengers: Age of Ultron   more
2 votes
0 comments
Clint Barton - Voter Comments
No Comments
Vote & Comment
5

The Flash is a fictional comic book superhero from the DC Comics universe. Created by writer Gardner Fox and artist Harry Lampert, the original Flash first appeared in Flash Comics #1.Nicknamed the Scarlet Speedster and the "Crimson Comet" all incar... nations of the Flash possess "super speed", which includes the ability to run and move extremely fast, use superhuman reflexes, and seemingly violate certain laws of physics. Thus far, four different characters—each of whom somehow gained the power of "super-speed"—have assumed the identity of the Flash: Jay Garrick, Barry Allen, Wally West, and Bart Allen. Before Wally and Bart's ascension to the mantle of the Flash, they were both Flash protégés under the same name Kid Flash.The second incarnation of the Flash, Flash, is generally considered the first hero of the Silver Age of comic books and the version of the hero most often featured in live action shows. On May 6, 2011, IGN ranked the third flash, Wally West, #8 on their list of the "Top 100 Super Heroes of All Time", stating that "Wally West is one of the DC’s greatest heroes, even if he doesn’t rank as the original "Scarlet Speedster"   more
1 vote
1 comment
Flash - Voter Comments

jaksunmadness says2015-04-30T21:51:33.6863095-05:00
Report Post
Robot or cyborg characters are usually boring. Same old same thing. Aquaman is meh and I don't know or care about Hawkeye. Flash has shown that speedsters do more than just be fast such as create ice from his movements, vibrate at superhuman speeds to tear through matter or phase through solid walls, travel through time and invented the infinite mass punch that even Superman learned from Flash
Vote & Comment
6

"Green Lantern" is the codename for a number of fictional superheroes who appear in comic books published by DC Comics. They fight evil with the aid of rings which grant them a variety of extraordinary powers.The first Green Lantern was created in 1... 940 during the first superhero craze, which began with Superman. Alan Scott usually fought common criminals in New York with the aid of his magic ring. Publication ceased in 1949 during a general decline in the popularity of superhero comics.In 1959, to capitalize on the booming popularity of science fiction, the Green Lantern character was reintroduced. Hal Jordan works for an interstellar law enforcement agency known as the Green Lantern Corps. Over the years, DC Comics has introduced a number of additional Green Lanterns. The most prominent of these are Guy Gardner, John Stewart, and Kyle Rayner.The Green Lanterns are among DC Comics' more successful properties. They have been adapted to television, video games and one motion picture   more
1 vote
0 comments
Green Lantern - Voter Comments
No Comments
Vote & Comment
7

Shazam, also known as Captain Marvel, is a fictional superhero who appears in American comic books published by DC Comics, and in a number of television and video game adaptations. The character was created in 1939 by artist C. C. Beck and writer Bi... ll Parker, and first appeared in Whiz Comics #2, published by Fawcett Comics.Shazam is the alter ego of Billy Batson, a boy who, by speaking the magic word "Shazam", can transform himself into a costumed adult with the powers of superhuman strength, speed, flight, and other abilities. His name is an acronym of the six figures from whom his magical powers derive: Solomon, Hercules, Atlas, Zeus, Achilles, and Mercury.Based on book sales, Captain Marvel was the most popular superhero of the 1940s, outselling even Superman, and Fawcett expanded the franchise to include other "Marvels", primarily Marvel Family associates Mary Marvel and Captain Marvel Jr., who can share Billy's powers. Captain Marvel was also the first comic book superhero to be adapted into film, in a 1941 Republic Pictures serial titled Adventures of Captain Marvel   more
1 vote
1 comment
Captain Marvel - Voter Comments

EAT_IT_SUKA says2015-04-30T19:09:53.5730182-05:00
Report Post
I was disappointed when I realized that Spiderman wasn't on this list. Spiderman is probably the most well-thought out, most creative superhero idea ever, and that is one reason why he is my second favorite hero. Anyway, Aquaman was well-thought out and creative as well, so I'll vote for him.